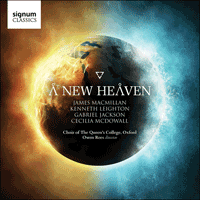 Queen's College Choir Oxford plunges into a world of music lain waste by wrathful divine judgement—the visions of St John in the Book of Revelation—before emerging joyously into 'the new heaven and the new earth’, death and suffering conclusively defeated.

The theme of this recording is ‘relevation’, both divine revelation (particularly the apocalyptic visions of the Book of Revelation) and revelatory visions of earth and heaven. The inspiration for the recording came from the extraordinarily moving and powerful funeral service for a dear colleague of mine, Dr Jackie Stedall, a service devised by Jackie herself shortly before her death, and for which she chose both readings and music. Among the readings were words from Revelation, and ‘Jottings’ made during her final illness, when the imminence of death revealed to her with heightened clarity the intensity of being alive and the wonder of experiencing the natural world. One of the three pieces we commissioned for the disc is a setting by Phillip Cooke of some of these Jottings. Alongside this vision of ‘the world on fire … burning in every moment’, the works on the disc encompass the divine radiance which enlightens (Rutter’s exquisite Hymn to the Creator of Light), and visions of heavenly bliss and eternal life, revealed to us through the words of the sixteenth- and seventeenth-century poets Edmund Spencer and John Donne. The bulk of the pieces on the recording are inspired by the extraordinary visions of John, the writer of the Book of Revelation, describing the ravaging of the world through divine judgement, the battles between good and evil, and the world’s eventual remaking as ‘a new heaven and a new earth’ in which death and suffering are no more. Two of these works are also new commissions, by Toby Young and Marco Galvani, who was a final-year student at Queen’s at the time of recording.

The disc presents two pairs of works which exemplify composers’ contrasting responses to a single text. The first such pair—James MacMillan’s Alpha and Omega and Edgar Bainton’s And I saw a new heaven—are settings of the passage from the Book of Revelation which provides the title for the recording. The other pair of works, by William Harris and (once again) James MacMillan, set John Donne’s vision of the heavenly life after our ‘last awakening’ at the day of judgement, Bring us, O Lord God. The dramatic opening of MacMillan’s Alpha and Omega, a series of monumental choral outbursts each of which ebbs away, evokes John’s vision of the ‘new Jerusalem’ and the passing away of the old created world. This music is recalled to conclude the motet, at the words ‘I am the Alpha and the Omega, the beginning and the end’. The divided upper voices of the choir usher in the central part of the piece with virtuosic coruscating scales, exuberantly introducing the lower voices’ solemn pronouncement, ‘Behold, the dwelling place of God is with man’. In Bainton’s justly loved treatment of this text, And I saw a new heaven (composed in 1928), the vision of the world remade steals in with gentle mystery, the texture woven from independent arching lines in the four voices. The announcement ‘Behold, the tabernacle of God is with men’ is presented as a triumphant fanfare for choir and organ, while the final section expresses the end of all tears with poignant intensity.

William Harris’s setting of Donne’s Bring us, O Lord God, written in 1959, recalls the sound-world of his famous treatment of Spencer’s poetry, Faire is the heaven, composed more than thirty years earlier. The similarity reflects the parallels between their texts, both visions of heaven’s perfection: Harris chose the same key for both works, employed a similarly rich harmonic palette, and scored them for two choirs, which often sing in dialogue, evoking the splendour of the heavenly music. MacMillan’s treatment of Bring us, O Lord God is (for most of its length, at least) strikingly different from Harris’s, less beatific and more unsettling: the opening attempts hesitantly to get past the opening words ‘Bring us’, and the unstable harmonic language suggests awe in the face of the mystery of life after death. These doubts are cast aside dramatically at the piece’s climax as the choir declaims ‘but one equal eternity in the habitations of thy glory and dominion’. The sense of quiet mystery then returns in the final repeated ‘amen’ (one of several points in the piece where the opening musical gesture is recalled), but at the last chord an unexpected beam of sublime light shines. MacMillan’s setting was commissioned by Schola Cantorum of Oxford in memory of Lydia Corfe Press, a member of the choir.

John Rutter composed the double-choir anthem Hymn to the Creator of Light in memory of Herbert Howells, and specifically for the dedication of the Howells memorial window in Gloucester Cathedral in 1992. He pays clear homage to Howells’ rich and distinctive harmonic language, most obviously in the opening, a vision of the creation of light which builds from a mysterious beginning to an incandescent climax at ‘the sun’s ray, the flame of fire’. The text is a translation of a prayer by Lancelot Andrewes (1555-1626), inspired by the opening of Genesis. The middle section of the piece is an energetic dialogue between the two choirs, in which Andrewes’s prayer becomes a paean to the revelations provided by God through the Bible. In a masterstroke, Rutter transforms his setting of the final word ‘light’ of this eulogy into the opening of the hymn ‘Light who dost my soul enlighten’ (the familiar melody is that of the German chorale ‘Schmücke dich’), and this chorale setting, in which the melody is accompanied by the opening motive of the piece, brings the anthem to a peaceful and affecting conclusion anticipating the soul’s entry into heaven. In ending thus with a chorale Rutter may well have been inspired by examples among the motets of Bach and Brahms. Cecilia McDowall’s I know that my redeemer liveth sets a composite Biblical text familiar from its use in Handel’s Messiah: her work was commissioned in 2009, the 250th anniversary of Handel’s death, to be performed alongside Brahms’ A German Requiem. The text is a revelatory vision of our bodily resurrection on the Day of Judgement. From a tranquil opening, the music builds to a radiant climax (highlighted by a sudden shift to a new harmonic realm) at the words ‘and in my flesh shall I see God’. The ensuing triple-time section incorporates a memorable lullaby-like portrayal of ‘them that sleep’.

The ‘fire of creation’ celebrated in Rutter’s anthem is at the heart also of the passages from Jackie Stedall’s Jottings set by Phillip Cooke in The world on fire. Jackie perceived this as ‘not the fire of destruction, but of energy, creation, love’, and these words generate the climax of Cooke’s setting. Before and after this moment, Cooke presents Jackie’s vision with simple directness, creating an atmosphere of attentive stillness and wonder at the smallest details of the natural world, such as ‘a quivering leaf’ portrayed by the use of a suddenly delicate texture of two solo soprano voices.

Another sublime vision of heaven, this time from the Book of Revelation, is presented in Rihards Dubra’s Stetit angelus, composed in 2005. The image of the angel at the altar holding a golden censer led Dubra to evoke liturgical ritual: to frame the work the tenors sing in the style of plainchant, lending the music the character of ancient and unchanging ceremony, while around this chant the upper voices suggest the rising smoke of the incense with a shifting haze of sound, created by some singers oscillating between pitches while others sustain their notes. Plainchant is likewise recalled in Gabriel Jackson’s Ecce venio cito, alternating here with the rhapsodic melodies of a soprano soloist repeating the invitation ‘veni’ (‘come’). In the opening section of the work Jackson (as does Dubra) creates the effect of a multitude of voices by asking each singer to intone the text independently, and against this animated susurration the sopranos sing rapturously of the gifts that the Lord will bring when he comes. The choir then joins together in an awe-filled statement of God’s declaration ‘I am Alpha and Omega, the beginning and the end’.

The angels of the Book of Revelation are also responsible for the cataclysmic destruction of the earth. Toby Young writes that his Seven trumpets ‘sets a dramatic text from Revelation describing a vision of the apocalypse. After a declamatory opening section, introducing the angels sent to herald man’s destruction, the music moves into a fast, dancing passage describing the consequence of each one’s judgement. The tone becomes increasingly fragmented and uncomfortable as these consequences turn into ever darker plagues (the sea turning into blood, great stars falling to the ground, a world in flames) until at its climax, the entire sun and moon are destroyed to leave a world in darkness. A solo voice is heard, crying a last lament for humanity, before a final prayer to God proclaims His greatness, asking for forgiveness and protection against such destruction in our lifetime.’

The works by Kenneth Leighton and David Bednall featured on this disc (both receiving their first recordings) portray the rejoicing of the heavenly host at the Lord’s victory and the coming of the kingdom foreseen in Revelation. In Leighton’s ‘Festival Anthem’ Alleluia, amen, composed in 1961, a hushed choral opening leads into a baritone recitative punctuated by playful organ interjections which anticipate the exultant and extended musical jubilation to come. The baritone likewise heralds the concluding section of the work, a vast arch beginning and ending in serene statements of a gently rocking motive. Bednall’s The seventh angel opens with the fanfare of the angelic trumpet, and this fanfare punctuates the work: it frames the quiet central section where music of ethereal beauty for high voices and organ presents a vision of the ‘sea of glass burning like fire’ beside which sing the host of those who conquered the Beast. The hurling of Satan into the abyss and his chaining there for a thousand years are the subject of Marco Galvani’s Et vidi angelum, of which the composer writes: ‘I have tried to depict the particular descriptions of angels within this part of the Bible. Rather than glittering seraphs, the angels of Revelation come down to earth with almighty devastation, and the physical portrayals take the form of powerful enforcers of God’s will. In this piece I have incorporated a number of different pitch sources, including harmonic inflections from early Byzantine and Russian Orthodox chant.’ The robust forcefulness of the piece’s opening invokes the overwhelming and awe-inspiring power about which Galvani writes, while in the second part Satan’s capture and chaining is depicted through an accelerating canonic ‘pursuit’ between the voices, climaxing in a triumphant return of the opening music.

This recording is dedicated to the memory of Dr Jackie Stedall (1950–2014), a much-loved member of The Queen’s College, who described the Chapel at Queen’s as ‘one of my resting places’.