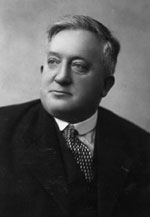 born: 18 September 1883
died: 1 January 1953
country: Poland
Różycki’s father Aleksander was a pianist and composer who taught at the Warsaw Music Institute, where Ludomir studied with the composer Zygmunt Noskowski, who also taught Szymanowski and the conductor Grzegorz Fitelberg. Together with another composer, Apolinary Szeluto, these three young musicians formed a collective called Młoda Polska w muzyce (‘Young Poland in Music’). At their inaugural concert on 6 February 1906 Różycki was represented by his first symphonic poem, Bolesław Śmiały (‘Bolesław the Bold’).

In 1907 Różycki completed his further studies with Engelbert Humperdinck in Berlin and a year later became conductor at the opera in Lwów (today’s L’viv, in Ukraine). He spent 1912–18 in Western Europe, returned briefly to Warsaw in 1919–20 to conduct at the Grand Theatre, and then devoted the rest of his life to composing and teaching, briefly at the Warsaw Music Academy at the start of the 1930s, and from 1945 at the State Higher School of Music in Katowice.

After Poland became independent at the end of the First World War, Różycki’s music was acclaimed at home but rarely heard abroad, although his ballet Apollo i dziewczyna (‘Apollo and the Maiden’, 1937) was premiered at the Paris International Exhibition that year. In the face of a new wave of avant-garde Polish composers who emerged in the late 1950s and 1960s, he largely became a historical figure.

Różycki is best known for his symphonic poems, operas and ballets, many of which draw on Polish history and culture. His list of works begins and ends with programmatic orchestral music: the symphonic scherzo Stańczyk (1903) and the now-forgotten symphonic poem Warszawa wyzwolona (1950), which was written at the height of communist socialist realism to celebrate Warsaw’s liberation by Soviet forces at the end of the Second World War. Stańczyk, one of his most popular works, is based on Jan Matejko’s painting (1862) of the Renaissance court jester, who is slumped in thought, brooding on the state of the nation. The music is by turns heroic and dance-like, incorporating the mazurka and kujawiak and recalling the musical idiom of Różycki’s older compatriot Ignacy Jan Paderewski.

Among the symphonic poems is the sombre Anhelli (1909), composed to celebrate the centenary of the birth of Juliusz Słowacki, one of Poland’s most significant writers. Słowacki’s poem ‘Anhelli’ is a visceral account of the self-destructive fate of Polish exiles in Siberia. Różycki’s music is dark and intense, closer now to the Straussian idiom of the Polish master of the symphonic poem Mieczysław Karłowicz, who had died earlier that same year. Other programmatic works include the ethereal orchestral prelude Mona Lisa Gioconda (1911), inspired by the novel The Romance of Leonardo da Vinci by the Russian symbolist writer Dmitry Merezhovsky.

The stage works are also wide-ranging in their topics, successful in their day but now regarded—perhaps unfairly—as too conservative in style. They include the so-called ‘fantastic’ operas Meduza (1911) and the Puccini-indebted Eros i Psyche (1916), which transposes the Greek myth into five historical periods and locations, from ancient Arcadia, through medieval Spain and ending in contemporary Europe. Notorious historical subjects followed in the shape of Casanova (1922) and Beatrix Cenci (1926), and there was also an operetta Lili chce śpiewać (‘Lili wants to sing’, 1932). Różycki’s most popular stage work in Poland and elsewhere is the exuberant ballet on the Polish legend about the Faustian Pan Twardowski (‘Mr Twardowski’, 1920), with its distinctly Tchaikovskian echoes.

Unsurprisingly, the non-programmatic pieces in Różycki’s output share many stylistic traits with the symphonic poems and stage works. Aside from songs, there is music for piano and for chamber forces, including the string quartet of 1915–16 (recorded on Hyperion CDA67684). Although there are no symphonies, Różycki did write a violin concerto (1944) as well as three works for piano and orchestra. 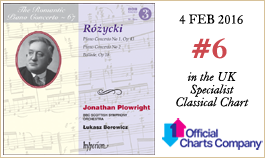