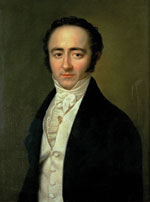 born: 26 July 1791
died: 29 July 1844
country: Austria
Constanze Mozart expected great things from her younger surviving son, Franz Xaver Wolfgang. Court Kapellmeister Antonio Salieri prophesied, optimistically as it turned out, that he would make a career ‘not inferior to that of his celebrated father’. Born just four months before Wolfgang’s death, Franz Xaver showed precocious talent as a pianist, and as a boy was taught by, inter alia, Salieri (ironically, given the baseless posthumous rumours that grew up around the Italian) and Hummel, who as a Wunderkind had once been a pupil of Wolfgang’s. In 1805, aged fourteen, he gave his public debut in Emanuel Schikaneder’s Theater auf der Wieden. Three years later he escaped from the inevitable scrutiny of the Viennese to the provincial obscurity of Galicia, where he initially served as music teacher to Count Viktor Baworowski.

Innately restless (a chip off the old block there), Franz Xaver then moved to a Polish patron, Count Janiszewski, before settling in Lemberg (present-day Lviv) as a freelance musician. His prime source of income seems to have been as piano teacher to Julie Baroni-Cavalcabó, the teenaged daughter of an elderly government official whose much younger wife, Josephine, became Franz Xaver’s longstanding mistress. He even moved in with Josephine and her husband to create an eyebrow-raising ménage à trois, to the discomfiture of his mother Constanze.

Trading under the name ‘W A Mozart Jr’ (his mother always called him Wolfgang), Franz Xaver emulated his father by undertaking a series of concert tours. Between 1819 and 1821 he performed in cities including Warsaw, Copenhagen (where Constanze was now living with her second husband, Georg Nissen), Berlin, Leipzig, Dresden, Prague, Vienna and Milan, where he saw his elder brother Carl, an official in the service of the Viceroy of Naples. But despite the Mozart moniker, and his attested virtuoso panache, his tours were only a modest commercial success. Franz Xaver returned to his teaching, and his ménage, in Lemberg, made an extended visit to Salzburg in 1829, and finally, in 1838, moved to Vienna. On a last visit to Salzburg, in 1842, he played his father’s by-then famous D minor Concerto, K466, at celebrations to mark the unveiling of the city’s Mozart memorial.

Researching for a Mozart biography with her husband Vincent in 1829, Mary Novello met Franz Xaver at his mother’s Salzburg home, and found him burdened (and who wouldn’t be?) by the impossibility of living up to his father: ‘This feeling may cast a shade over his countenance rendering it rather heavy, and damps the ardour of his musical works reducing them to mediocrity; something of this despair of effecting anything worthy of his father’s name seemed to hang over him, otherwise he appeared goodnatured, modest, easy of access and frank’—though Mary and Vincent later found that ‘he improves much on acquaintance’.