born: c1540
died: 16 October 1599
country: Austria
In contrast to the dearth of information we have about many of even the best-known Renaissance composers, the life and activities of Jacob Regnart are comparatively well documented. The reason for this is his long and almost continuous employment in the service of the Imperial Habsburg family, the running of whose chapel establishments was meticulously noted. Regnart was also the composer of several popular collections of German songs in three parts, and the wide dissemination of his music also contributes to our knowledge of his life and works.

It is not uncommon in early modern Europe for more than one family member to join the same trade or profession: among composers one thinks of the brothers Arnold and Hugo de Lantins in the early fifteenth century, and Antoine and Robert Févin around 1500. Jacob Regnart is unusual, however, in being one of no fewer than five brothers who were all ecclesiastical musicians. Two, Charles and Pascasius, were employed by the Spanish Habsburg king, Philip II; Augustin was a canon at Lille; and the best-known other than Jacob was François, who worked at Tournai and later for the Austrian Habsburgs, and by whom numerous motets and chansons survive. Augustin published a motet collection by his brothers, to which François contributed twenty-four pieces, and Jacob ten.

The relative ages of the brothers are not known; Jacob seems likely to have been born in the early 1540s. He entered Habsburg service as early as 1557, presumably as a boy chorister, though by 1564 he was being paid the standard salary for an adult singer. Apart from a spell studying in Italy in the late 1560s, Regnart remained in Habsburg service until his death on 16 October 1599; during that time he worked under the emperors Maximilian II and Rudolf II and the Archduke Ferdinand, in Vienna, Prague and Innsbruck. His publications of secular music appeared at regular intervals from the 1570s onwards, often achieving several reprints. His sacred music also was published in quantity, though some publications are lost and other works survive only in manuscript. Perhaps the most important of Regnart’s publications (in his own eyes, at least) was the series of three books of Mass settings published in 1602/3. Although these emerged posthumously, Regnart himself left an extended dedicatory preface to the emperor Rudolf II in the first volume, so it would appear that he was working on this ‘complete edition’ before his death. In it he describes himself as having served ‘for many years as Vice-Master of the [Imperial] choir’.

Regnart’s style is not dissimilar to that of his slightly older compatriot, Orlandus Lassus. Regnart and Lassus, indeed, shared numerous biographical details, both having worked as expatriate singers from a young age (Lassus in Naples), both remaining for long periods in the service of one family (Lassus at the Dukes of Bavaria in Munich), and both achieving wide recognition through their publications. The two composers were known to one another, moreover: Lassus recommended Regnart to the Saxon royal court in 1580, though Regnart did not move to Dresden. No contemporary composer matched Lassus’s output of works in different genres, though with his German songs, Italian-style villanelle, and sacred music, Regnart came closer than most. Regnart’s music can be differentiated from that of Lassus, however, by his slightly more conservative approach, showing a greater interest in working out contrapuntal ideas, whereas Lassus was increasingly pithy and concerned with the rhetorical projection of the text. 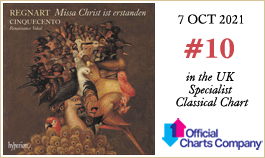