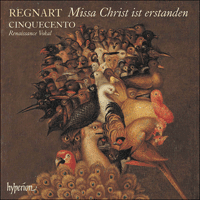 Two substantial Mass settings, sounding here as though Regnart might have written them specifically for the glorious voices of Cinquecento: this is a welcome contribution to the restoration of an important but still under-appreciated figure.

In 1580, the celebrated Munich composer Orlande de Lassus wrote a letter to the Elector of Saxony, naming suitable candidates for the newly vacant position of court chapelmaster. Declining the Dresden position himself—although not without noting his exceedingly comfortable employment arrangement with the Duke of Bavaria—Lassus reflected on who might be cut out for a job that required reliability and a degree of diplomacy, in addition to exceptional musical skill. He identified a few likely possibilities, all fellow Netherlanders employed at other Central European courts. Lassus saved his most fulsome praise for a composer at the Prague court of Habsburg Emperor Rudolf II. ‘There’s a fine fellow there, humble and wise, whose name (if I do not err) is Jacobus Regnart’, he began, before moving on to specifics: ‘He speaks German well (and other languages besides) and is an excellent musician.’

Regnart’s name was probably already well known to the Elector: his collections of light secular music (Italian canzonettas and German songs) were bestsellers, and he had recently been promoted to vice chapelmaster at the Imperial court. The Dresden position offered the rising star an opportunity for further advancement. Yet when the offer for the position came, he too declined. Religion—a subject Lassus had tactfully avoided in his letter—may have played a role in Regnart’s decision. His staunch Catholicism would have put him at odds with many at the Lutheran Saxon court, and perhaps with this in mind he chose to remain in Prague. When he did leave the Imperial court, in 1582, it was to work for another Habsburg: the Emperor’s zealous uncle, Archduke Ferdinand II ‘of the Tyrol’.

Regnart spent the better part of the 1580s and ’90s at Ferdinand’s court in Innsbruck, writing sacred music to advance the Archduke’s enthusiastic efforts to revitalize Catholicism in the lands under his jurisdiction. Regnart stayed in touch with old colleagues at the Imperial court, however, and following the Archduke’s death in 1595, he returned to Prague to resume his old position. He brought with him dozens of polyphonic Mass settings, as yet unpublished, and set about preparing them for publication.

Among these were the two polyphonic Masses on this album. Both derive their musical material from venerable German Easter hymn tunes rather than from recent polyphonic models (motets or madrigals), as was more typical by the late sixteenth century (and, indeed, was more typical for Regnart). Christ ist erstanden (‘Christ is risen’) can be traced back to the twelfth century. Expanding from a single strophe to three strophes by the fifteenth century, it was evidently sung by the congregation in alternation with (or as an alternative to) the Easter sequence Victimae paschali laudes. The last of these three strophes repeats over and over again the word ‘Alleluia’, a joyful acclamation that is not sung—and thus not heard—during Lent, the sorrowful and reflective forty-day period leading up to Easter. The hymn was so ubiquitous that the astronomer Johannes Kepler—employed for several years at the Prague Imperial court—could quote just a snippet of the tune in his Harmonices mundi (1619) as an example of a ‘naturally ordered song’, and trust his German readers to recognize it even without the words.

Freu dich, du werthe Christenheit (‘Rejoice, O worthy Christendom’) is of a slightly later vintage, dating from the fifteenth century, and is noticeably more expansive. While the first half of the melody unfolds largely by step, much like Christ ist erstanden, the second half breaks free. It opens on the hymn’s highest pitch and hovers there briefly before descending angularly through a succession of leaps that is balanced out by the smooth symmetry of the concluding phrase, with its exhortation to celebratory prayer: ‘so we shall sing: Alleluia.’

Both hymns were included in the Catholisches Gesangbüchlein (‘Little Catholic songbook’), a pocket-sized hymnal printed with the Archduke’s approval (and perhaps even his involvement) in Innsbruck in 1588. The hymns appear in a section headed ‘Old Catholic Easter songs’, their pre-Reformation origins helping to cement the argument made in the preface: that singing the Lord’s praises in the mother tongue was not a Lutheran innovation but rather an ‘age-old Catholic practice’, beneficial not only for individuals young and old, but for all of Christendom. Regnart used these beloved hymn tunes to weave a thread of meaning through the polyphonic fabric with which he set the unchanging Latin texts of the Mass Ordinary (Kyrie, Gloria, Credo, Sanctus and Agnus Dei).

As a foreigner, Regnart had not grown up with these melodies. But there is little doubt he knew about the 1588 hymnal, as that very year the same small Innsbruck printing house had also issued his Mariale, a collection of motets for the Virgin Mary. He probably thumbed the pages of the little songbook, looking for source material that would enable him to convey in sound the joyful promise of salvation which Easter heralded for the Christian faithful. His musical Easter tidings would have been readily perceptible to even the most inexpert of his Central European listeners, appealing especially to those music-loving Christians who had been lured (to borrow the words of the worried editors of the Innsbruck hymnal) by the ‘seductive and frivolous’ corruptions of Protestant hymnody. (Sharp-eared listeners might recognize the first phrase of Christ ist erstanden from its appearance in one such ‘corruption’: Christ lag in Todesbanden, a re-working by Luther, famously set by Bach.)

In both Masses, each movement opens with the first phrase of the source hymn. Sometimes this ‘motto’ passes from voice to voice in imitation (as in the opening of the Kyrie of the Missa Christ ist erstanden); at other times it is set in relief, sounding for long durations in one voice while the others move fluidly around it (as in the opening of the Sanctus of the Missa Freu dich, du werthe Christenheit). Beloved by music scholars on the prowl for unifying musical structures, such compositional devices reminded Regnart’s long-ago listeners of Easter’s significance: inviting them to listen carefully for melodies they had sung themselves, but also calling to mind—in familiar terms—the hope offered by Christ’s resurrection.

The simplicity of the source material—a tune rather than a multi-voice composition—means that the relationship between the model and Regnart’s polyphonic re-working is easily heard in each Mass movement. Regnart ingeniously refracts the hymn tunes through the texture and across the span of a whole Mass, sometimes fragmenting the melodies, sometimes stating them faithfully. There is no mistaking the hymn tune in the Kyrie of the Missa Christ ist erstanden: heard originally in the tenor, it is reiterated first below then above, so that it saturates the texture. In the more varied texts of the Gloria and Credo, the hymn recedes to the background, as Regnart uses sound to clarify the structure and meaning of specific passages. So, for example, the parallelism of the exuberant expressions of adoration ‘Laudamus te. Benedicimus te. Adoramus te. Glorificamus te.’ (‘We praise you. We bless you. We worship you. We glorify you.’) is reinforced by the sequential movement of the lowest voices in the Gloria of the Missa Christ ist erstanden. Equally striking is the musical repetition in the ensuing Credo on the lines ‘Deum de Deo, lumen de lumine’ (‘God from God, light from light’).

Regnart varies pacing and declamation in order to set the scene for the different ritual functions of each Mass movement. The brisk syllabic setting of the Credo of the Missa Freu dich (at least partly a practical concession to the lengthy text of this crucial statement of faith) stands in stark contrast to the prayerful quality of the Kyrie, which—like the Kyrie of the Missa Christ ist erstanden—opens with a point of imitation of the strictest sort. Regnart’s sparing use of chordal textures makes its deployment at the close of the Credo of the Missa Freu dich all the more effective. As the words turn to the promise of salvation—‘resurrectionem mortuorum, et vitam venturi saeculi’ (‘the resurrection of the dead, and the life of the world to come’)—the voices line up, briefly shifting to a lilting triple metre before dissolving into the melismatic outpouring of the concluding ‘Amen’.

Maria fein, du klarer Schein (‘Mary fine, bright radiance’) is a motet-style setting of a single stanza of Maria zart, a lengthy fifteenth-century song in praise of the Virgin Mary. It was printed posthumously, in a 1604 anthology bringing together settings by an impressive ‘who’s who’ of Central European composers, crowd-sourced by the intrepid Augsburg Cathedral chapelmaster Bernhard Klingenstein. Much as he does in his Mass settings, Regnart draws extensively—but not strictly—on the pre-existing melody: the Maria zart tune emerges sometimes in the lower voices, sometimes in the higher voices, and he uses it as a quarry for constructing the surrounding counterpoint.

Rühmbt alle Werck deß Herren (‘Praise all that the Lord has done’) and Wann ich nur dich hab (‘When I have only you’) help us hear what made Regnart so popular in the first place. Both are re-textings of light Italian love songs he wrote in the 1570s, the new devotional texts furnished by people who recognized how well suited the music was for amateur performance—not overly taxing for schoolboys, or for pious men and women looking for unobjectionable music to sing at home. As the organist and choir director Erasmus Widmann put it—a bit defensively—in the preface to his 1622 edition: ‘Even though the songs are old, they are so lovely and so skilfully composed that they can in no way be improved.’ The wordsmiths who grafted the new texts onto Regnart’s music went beyond merely ensuring that the correct syllables were stressed, additionally retaining expressive moments with sensitivity. The repeated question ‘Warumb?’ (‘Why?’) in Rühmbt alle Werck was originally, in Regnart’s Italian canzonetta Vorrei saper da voi, a tentative ‘per che …’.

Regnart died in Prague in 1599, after a protracted and painful illness, before any of the Masses he had brought with him from Innsbruck could be typeset. His widow Anna—the daughter of a renowned bass singer at the Bavarian court and no doubt musically trained herself—returned to Munich with their six children. There she oversaw the printing of no fewer than three volumes of his Mass settings at a well-connected Frankfurt printing house. In a move that would surely have pleased her husband, the volumes were dedicated to a trio of powerful Catholic rulers: Regnart’s former employer Emperor Rudolf II, Rudolf’s cousin Archduke Ferdinand of Austria, and Duke Maximilian of Bavaria.