born: c1561
died: 1613
country: Italy
Gesualdo was born in the south of Italy, probably in Naples, around 1561. He was socially very well connected both with the Church and with the aristocracy. One of his uncles was Saint Carlo Borromeo, another was the Archbishop of Naples, and a great-uncle had been Pope Pius IV. He married Maria d’Avalos, daughter of the Marquis of Pescara, whom he eventually assassinated in Naples on 16 October 1590 when he surprised her ‘in flagrante delicto di fragrante peccato’ with the Duke of Andria. This murder made Gesualdo widely renowned both in his own time and ever since. It also, as it were, sets the scene for his music which, in its passionate style, seems to confirm the sensibilities of such behaviour. Although the deed was not technically against the law, Gesualdo inevitably became a potential victim of revenge from the two offended families involved, and he retired to his estates at the town of Gesualdo, where he largely remained until his death in 1613. In 1594 he married Leonora d’Este, niece of the Duke of Ferrara.

From an early age Gesualdo was obsessed with music. To begin with it seems that he was ashamed of this, perhaps for social reasons, and cultivated a pseudonym (Gioseppe Pilonij). However, public interest in him brought his secret into the open, and there are many contemporary testimonies to his abilities as a composer. One of the strongest influences on him was the musical establishment of Alfonso II d’Este in Ferrara, especially the virtuoso singing of ‘the three ladies’ and the avant-garde compositions of such court composers as Luzzaschi. Through his publications Gesualdo became respected as more than an accomplished amateur at composition and, from about 1595, he tried to establish his own group of court musicians at his castle of Gesualdo, near Naples. The last years of his life were spent in seclusion at Gesualdo where his intense melancholia drove him to the verge of insanity. His second wife tried several times to obtain a divorce from him. 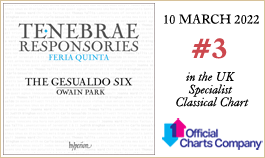 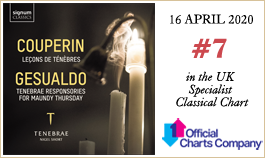