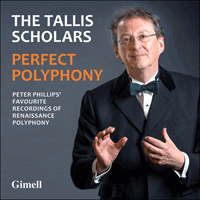 “When I conducted my first concert with The Tallis Scholars in 1973 I could not have imagined that we would go on to perform concerts all around the world, or that millions of people would regularly listen to our recordings. We have had the happy chance to explore deep into Renaissance polyphony: here are some of the gems that have thrilled me over the years.” (Peter Phillips)

‘There is no period choral group that has consistently produced as many important and enlightening discs—they still lead the pack’ (Audiophile Audition, USA)» More
‘If you’re coming fresh to Renaissance polyphony or to the work of this excellent ensemble then this new set is an ideal place to start. However, be warned: the purchase of Tallis Scholars recordings soon becomes addictive’ (MusicWeb International)» More
‘The Tallis Scholars’ perfect intonation is enhanced by their uncanny ability to imbue the performance with meaning and beauty, never departing from the true spiritual significance of these works’ (The Whole Note, Canada)» More

The Tallis Scholars and Gimell Records have so far recorded fifty-six albums. Some of the tracks from this library of material have become well known, either because the music in question was already an established masterpiece, or because ours was the first recording of a masterpiece which subsequently came to be recognized as such. Some of these recordings were put together on a double album entitled The Essential Tallis Scholars. Inevitably other tracks, which included some of my personal favourites, could not be included. Perfect Polyphony is designed to redress the balance—and it is a special pleasure to have the opportunity to do this in the year when we shall celebrate our 2,000th concert.

Perhaps it will come as a surprise that Palestrina’s Missa Papae Marcelli is included in this context, since it is so extremely well established. However The Tallis Scholars have built up a special relationship with it, having released three recordings and sung 140 concert performances to date. It was also the very first piece we recorded—on 17 March 1977 in Merton College Chapel—as part of Steve Smith’s finals portfolio for the Tonmeister course at Surrey University. Many years later one of the tape masters was found in the back of a cupboard, containing not only part of the concert performance we gave that evening but also part of the rehearsal. It gave me quite a jolt to hear what I had to say to the singers of over thirty years ago. This concert marked the beginning of my collaboration with Steve, with whom I set up Gimell Records in 1980; and almost the beginning of my involvement with Merton Chapel. The version of Papae Marcelli included here is the third of the three we have issued, released in 2007 and also recorded in Merton College Chapel.

Both Victoria’s Versa est in luctum and Gesualdo’s Ave, dulcissima Maria were released in 1987, the year we won the Gramophone Record of the Year Award with music by Josquin. Both pieces have cropped up regularly in our programmes, most often as encores, as I like to send the audience home in a mood of contemplation rather than whoopee. We last sang the Gesualdo on the stage of the Royal Albert Hall in 2013, to mark the 400th anniversary of the composer’s death. Our Gesualdo album, from which this comes, was one of the first to be made in Salle Church, Norfolk: we left Merton Chapel in 1986 for Salle in search of a more rural setting, eventually returning to Merton in 2005.

Our album of Jean Mouton holds a special place in my affection, since I took a gamble on him. This was the kind of project accountants don’t like—both Mouton and his music were unknown to the extent that, with the possible exception of the incredible Nesciens mater, there was no headline event to shout about. I argued that it was our job and privilege to have the chance to resurrect composers who were considered geniuses in their lifetimes but have been forgotten by simple accidents of fate. We had performed this kind of resurrection a few times before 2012, when this album was made, most notably perhaps with the Cardoso Requiem; but even I was unprepared for the success of the Mouton, who suddenly had a big public. I include two of the finest tracks here—the exquisite Salva nos, Domine is another of our standard encores in concert.

I suppose the same could be said of my fascination with Nicolas Gombert, who was also very little known when we took him up, though this time I was not alone in wanting to promote him. For me, as for my friends Paul Van Nevel and Bo Holten, he represented an ideal of the Flemish style, dense without being cluttered, his textures original and emotive. His swansong was said to be a set of eight Magnificats, one on each tone, which apparently he conceived while rowing the Emperor’s galleys on the high seas as punishment for pederasty. All of them are elaborately worked, though number 6 is the most elaborate, containing some of the most intense polyphony of the whole period.

Alongside Mouton and Gombert I would list our album of John Browne as a high-point of our career—again because we were putting before the public compositions of the highest quality, yet of little fame. Browne and Cornysh were the heroes of the Eton Choirbook period in England (around the year 1500), a contemporary duo of equals and opposites to rival any such duo later, like Josquin and Isaac, Tallis and Sheppard, Weelkes and Gibbons. Every sacred piece that Browne wrote was so substantial that we could only fit five of them onto this album. I could have chosen any of them to include here, but went for Stabat iuxta because I don’t know another work of any length which is scored for four tenor and two bass parts. The resulting textures are just astonishing, especially at the end, where he goes almost jazzy with his blue harmonies.

Sets of Lamentations have formed the basis of many of our concert programmes, always appealing to audiences with their deep regret, and usually substantial in length. Tallis’ two sets have come to epitomize this genre for many concert-goers, though at the time they were written he was doing no more than joining in with a much-visited tradition of penitential writing. I have conducted one or other of them, with The Tallis Scholars alone, nearly 200 times, and never tire of them. The polyphony is not particularly complex, yet there is always something new to find in it.

With the Brumel we come onto even more personal ground, since Caroline Trevor and I asked for the recording to be played at our wedding. It might be thought strange to ask for a text of this kind to be sung during a service of celebration, but we did so because we had not originally planned to record it and the impromptu beauty of the singing had acquired an almost miraculous dimension in our minds. We had needed a filler for the album and, having the music for this set fortuitously to hand, sight-read it onto the tape. It has become one of our favourite tracks, with Caroline, unusually for an alto in our group, singing the top part.

The Ferrabosco Lamentations represent an inspired remaking of the English style, especially Tallis’ style, by an émigré. I have always particularly admired the final ‘Jerusalem’ section—encouraging one to wonder whether Ferrabosco had come to regret his semi-profession as a spy.

I include Isaac’s Optime pastor because I remember having had a great time conducting it on the sessions, yet never having the occasion to conduct it since, despite my enthusiasm. For some reason it has eluded being selected for a concert programme—perhaps because of its length, perhaps because of its scoring, or difficulty. It ends with one of the most thrilling sequences ever written, an irresistible plunging downwards to a low D, with a kinetic energy all its own. I have long relished the stylistic differences between Isaac and Josquin—they were a kind of chalk and cheese—and I hope that in 2017, the 500th anniversary of Isaac’s death, these will be explored. Optime pastor will surely feature.

My final choice is the four-part Missa Ave maris stella by Josquin. As will become apparent in due course, I have decided to book-end my career with a complete recording of Josquin’s eighteen Masses. During the course of this project, still not quite finished, I came across such a wealth of fine music that almost any of these pieces could have been put forward here. I chose this one because I think it ought to be sung as a matter of course by any choir capable of singing, for example, Byrd’s Mass for four voices. It ought to be standard repertoire, being compact (unlike some of Josquin’s other Masses), written for the modern SATB choir (unlike most of them), and beautifully logical in its use of the plainchant model. Those choirmasters who have felt that the mid-renaissance repertoires might be a step too far for their singers, but want an accessible introduction to them, need look no further.

I hope you will enjoy listening to this personal selection of Tallis Scholars tracks. I could have chosen others—by Lassus, Sheppard, White, Clemens, Cornysh, Cardoso, Byrd, Rore, Tomkins and more—though they are all out there for you to explore. And then, beyond our catalogue, there are countless more composers and more tracks to explore. Interest in, and love of, renaissance polyphony is yet young.