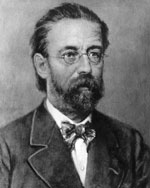 born: 2 March 1824
died: 12 May 1884
country: Czechoslovakia
Born in the East Bohemian town of Litomyšl on 2 March 1824, Bedřich Smetana became the first composer of genuine talent to reflect Czech stories, characters and even the country’s scenery in his music. The first of eleven children to survive infancy, he took music lessons from his father, a master brewer and amateur violinist. Smetana moved to Prague in 1843 with his young wife, teaching piano and studying composition with Josef Proksch. After the Prague Revolution of 1848, the German speaking Smetana began to learn Czech. He moved to Sweden in 1856 and prospered there as pianist, conductor and composer.

Political changes in Bohemia convinced Smetana to return to Prague in 1861, where he became principal conductor of the newly established Provisional Theatre. He almost single-handedly created a repertoire of Czech operas, his The Bartered Bride and Dalibor outstanding among them. Traditionalists within the press and the conservative directors of the theatre opposed Smetana’s attempts to alter the status quo, preferring Italian, French and German imports to the composer’s bold Czech operas.

Smetana stood up to his many critics but was forced to resign in 1874 following the onset of syphilis. Although he soon became totally deaf, the composer created a cycle of six symphonic poems, Má vlast, embodying the prevailing spirit of Czech nationalism, and a series of emotionally turbulent late works. Professional success countered the composer’s depression and brought some comfort to his state of severe physical pain and mental distress. He was admitted to Prague’s asylum for the insane three weeks before his death on 12 May 1884. 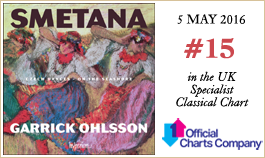