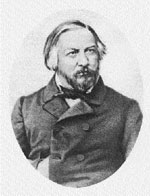 born: 1 June 1804
died: 15 February 1857
country: Russia
It was not until the early 1860s that a formal music conservatoire was established in Russia, initially directed by the great Anton Rubinstein, who founded the St Petersburg Imperial Conservatoire in 1862. His younger brother Nikolai became director of the rival Moscow Conservatoire when it opened in 1866.

It would be wrong, of course, to assume that no musical education existed before 1862; and if – equally – one cannot claim that no Russian composer flourished before Mikhail Glinka (1804-1857), there is no doubt that he was the first truly important Russian composer, considered by Russians to be the ‘musical acorn’ from which the mighty oak tree of Russian music was to grow.

When Louis Spohr visited St Petersburg in 1802 he was surprised to learn that the city’s musical life was dominated entirely by foreign musicians. More than a century earlier the Eastern Orthodox Church, which remained a powerful governing force, had proclaimed a ukase which instructed that ‘musical instruments were to be broken up and burned’ – and not merely, it seemed, in places of worship (although the Church does not permit musical instruments to this day). It was into this ethnically empty musical world that Mikhail Glinka was born in 1804. Fortunately, his father’s wealth and cultural aspirations enabled him to study music after a fashion, but the youth was determined, if possible, to bring a Russian character into the music which he wanted to write. This was not easy; nor was it soon achieved.

from notes by Robert Matthew-Walker © 2001