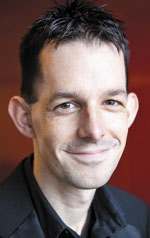 born: 1977
country: United Kingdom
Iain Farrington has an exceptionally busy and diverse career as a pianist, organist, composer and arranger. He has performed worldwide alongside artists such as Bryn Terfel, Lesley Garrett and Paul McCartney; he played the piano at the opening ceremony of the London 2012 Olympics with the London Symphony Orchestra and Simon Rattle, refusing to be distracted by the antics of Mr Bean next to him; and he has had a number of orchestral works broadcast by the BBC, including Gershwinicity, commissioned for the 2018 Proms, and Beethoveniana (a virtual performance) for the 2020 Proms. Two dramatic choral cantatas—The burning heavens for choir, strings and piano, and An old belief for choir and organ—were commissioned and have been performed by Twickenham Choral under Christopher Herrick’s direction.

from notes by Christopher Herrick © 2021