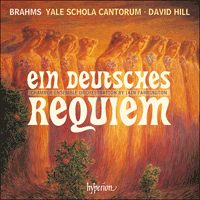 A performance which reveals a quite different dimension to this most monumental of all Brahms’s works. Iain Farrington’s arrangement—the orchestral forces distilled down to an instrumental octet inspired by the composer’s own piano reduction—is a perfect match for the glorious young voices of Yale Schola Cantorum.

‘Much of the choral work is as hushed and haunting as any on disc. David Hill’s instincts are sound, especially in the Requiem’s outer pillars and its keystone, ‘How lovely are thy dwellings’’ (Gramophone)
‘The choral singing itself is excellent. The 32-member Yale Schola Cantorum is full of young, vibrant voices, and they respond with alacrity and sensitivity to David Hill's vastly experienced direction … the two soloists match the choir in youthfulness and ardour’ (BBC Music Magazine)

‘This version of the 1868 Brahms A German Requiem pares his otherwise monumental forces to a 33-voice choir supported by an instrumental octet, the result of arranger Iain Farrington’s having consulted the composer’s own piano-four-hands edition of the score. This chamber incarnation of this most intimately resigned of the Brahms compositions retains the piano in concert with those winds and strings that contribute to the work’s distinctive color … baritone Matt Sullivan addresses the individual’s relation to the transience of life and the anguish of existential doubt in the solemn, 'Herr, lehre doch mich' … the string quartet that accompanies the soprano entry of 'Ihr habt nun Traurigkeit' produces a luminous clarity as Natasha Schnur implores the Lord for comfort’ (Audiophile Audition, USA)» More

‘The quality of the singing and playing, and Hill’s pacing and control of the work in this sonorous and carefully recorded account, is of a very high order … any chance to hear Brahms’s great work sung by a superb choir, which this Yale group unquestionably is, cannot be sniffed at … the music-making is splendid and I am certain this is a disc to which I will return’ (MusicWeb International)» More

Johannes Brahms likely had several influences that spurred him to write A German Requiem, which he completed in 1868. After the death of his friend and mentor Robert Schumann in 1856, Brahms considered creating a musical memorial. Yet perhaps a more direct impetus was the death of his own mother in 1865. Indeed, the texts that he excerpted from Luther’s Bible prominently feature the idea of motherly comfort for those who mourn.

Brahms’s use of German Bible verses rather than the standard Latin texts of the Requiem Mass places his work closer to the lineage of Lutheran works by Bach and Schütz than to the Catholic Requiem tradition represented by Mozart and Berlioz. Brahms intentionally avoided texts referring specifically to Christ or redemption after death, instead choosing to focus on the experience of grief, the transience of life, blessings for the dead, and the human desire for comfort and consolation. In this sense, rather than a Mass for the dead, Brahms’s composition is a Requiem for the living who mourn the dead.

Iain Farrington’s chamber orchestration highlights the sense of intimacy and personal expression inherent in the work. Inspired by Brahms’s own arrangement for piano four-hands, the chamber version retains the piano at the core of the texture, with the inclusion of strings and winds adding colour and variety. The smaller ensemble spotlights the chorus while drawing on Brahms’s rich orchestration. Farrington remarks: ‘The three wind players bring the soaring, expressive solos to life, while the string soloists fill the sound with intensity and depth. From the very opening of the piece, the aching long lines are sustained with ease and warmth … Above all, it is hoped that the arrangement allows the wide-ranging emotional essence of the piece to be fulfilled, creating a rich and satisfying experience for the performer and the listener.’

While the text of the Requiem Mass prays that God grant rest to the departed, Brahms focuses on the living. The first line of the work, taken from the Gospel according to Matthew, offers comfort to mourners:

Selig sind, die da Leid tragen, denn sie sollen getröstet werden.
Blessed are they that bear grief, for they shall be comforted.

To support this text, Farrington creates a consoling atmosphere, with individual instrumental lines gently interwoven with the voices of the chorus. The music pleads and gently cries out, expressing the sadness of those who mourn. However, when that sadness progresses to joy at the words ‘mit Freuden’ (‘with joy’), a faster tempo and crisper articulation create a sense of animation. Both sadness and joy retain an intimate quality throughout, while showing the two poles of emotion through the multitude of textures in the ensemble.

In the second movement, ‘Denn alles Fleisch es ist wie Gras’, the sorrow of Brahms’s Requiem comes to the fore. Solo strings intone the funereal march, occasionally releasing into repose and relief. The instrumental ensemble takes on a reflective inwardness, contemplating the transience of life on earth. But according to the text, such transience is redeemed through the everlasting and eternal quality of the Lord. The chorus declares the joy of this realization, exchanging lines between sections in an excited dialogue.

The baritone soloist enters in the third movement, ‘Herr, lehre doch mich’, as the text turns to the individual’s experience of the fragility and uncertainty of life. The chorus both accompanies and responds to the soloist’s pleas as the music wavers ambiguously between D major and D minor. The piano is prominent in the texture, and the movement concludes with the celebrated double fugue over an ‘everlasting’ pedal D. Vocal entrances articulating various tonal centres heighten the tension before resolving to a clear and triumphant D major.

The fourth movement, ‘Wie lieblich sind deine Wohnungen’, serves as the centrepiece of the Requiem. In this pastoral evocation of the promised comfort, Brahms omits the darkness and sorrow normally associated with the liturgical Requiem. Instead, he allows the earth to serve as a metaphor for the sacred dwelling place, where peace and repose are found. Once again, the chamber arrangement emphasizes the closeness and intimacy of the soul’s permanent restoration.

The vocal solos take on a quality of directness and clarity in Farrington’s chamber arrangement, which permits a nuanced interaction between the soloist and instruments. The soprano solo in the fifth movement, ‘Ihr habt nun Traurigkeit’, benefits from the transparency of the chamber ensemble, speaking with the delicacy and vulnerability of one of Brahms’s songs for voice and piano. This fifth movement was added to the Requiem six months after its initial premiere; Brahms’s original conception was for a six-movement work. As the soprano soloist sings ‘Sehet mich an’, asking the Lord for comfort, the solo line soars high above the chorus, calling out for sacred consolation.

Movement six, ‘Denn wir haben hie keine bleibende Statt’, serves as a structural balance to movement three. It is similarly in a ternary form with a baritone solo, and similarly concludes with a fugue. The soloist enters with text from the first epistle to the Corinthians: ‘Siehe, ich sage euch ein Geheimnis’, words also famously set by Handel for the solo bass in Messiah. Brahms artfully modulates from C minor to F sharp minor as the soloist sings ‘Geheimnis’ (‘mystery’), and the second section of the movement contains one of the most striking choral passages of the piece—a fast triple metre with full instrumental forces and the chorus declaiming ‘Denn es wird die Posaune schallen, und die Toten werden auferstehen unverweslich’ (‘For the trumpet will sound, and the dead will be raised incorruptible’).

The final movement, ‘Selig sind die Toten’, provides both a musical and a textual counterpart to movement one, returning to the F major of the opening for the work’s completion. Here, the blessings previously offered to the living are instead bestowed upon the dead:

Selig sind die Toten, die in dem Herrn sterben, von nun an.
Blessed are the dead that die in the Lord, from henceforth.

The movement is in ternary form with a coda derived entirely from the corresponding section in the first movement. The chorus brings the movement to a close with repetitions of the word ‘Selig’ (‘Blessed’)—the same word which began the Requiem—lending the entire work a beautiful symmetry and sense of resolution.

The German Requiem was described by several early critics as overly academic and monotonous in nature. Yet the work’s continued popularity, especially throughout the latter half of the twentieth century, demonstrates that its subject matter, the universal experience of loss, mourning, comfort and peace, still resonates with modern audiences. Brahms composed his German Requiem to convey the spiritual essence of his chosen biblical texts in a way that could serve all of humanity. This is perhaps best understood through Brahms’s own words to his friend and organist of Bremen cathedral (who was leading rehearsals for the first performance): concerning the title ‘A German Requiem’ he wrote ‘As far as the text is concerned, I will confess that I would very gladly omit the “German”, and simply put “of Humankind”.’