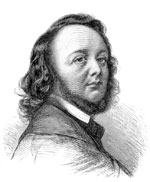 born: 1810
died: 1876
country: Germany
Ferdinand Freiligrath was born in 1810 in Detmold. From the outset of his life he had a link with the English language: one of his uncles had a business in Edinburgh. He lived in Amsterdam before marrying and settling in Darmstadt. His Gedichte of 1838 established his reputation. If he had not been a radical given to writing left-wing political verse Freligrath might have had a comfortably settled life in Germany. Exposed to police harassment and political persecution he moved to Belgium, and thence to Switzerland and England. In the revolutionary year 1848 he returned for a short while to Germany where he was arrested for sedition. He then moved to London in 1851 where he worked in a Swiss bank for seventeen years while writing for the German press and contributing to the English review, The Athenaeum. He was a fellow-exile of Karl Marx (also in London at the time) and a member of the earliest German Communist Party. His eventual return to Germany was soon followed by the Franco-Prussian War of 1870/1 for which he wrote patriotic verse. He died in 1876 in Cannstadt near Stuttgart.