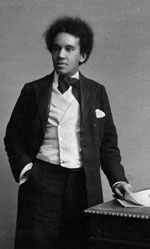 born: 15 August 1875
died: 1 September 1912
country: United Kingdom
Samuel Coleridge-Taylor was born on 15 August 1875 in Holborn, central London. The first musically significant event in his life occurred when, at the age of about five, he was given a quarter-size violin by the person believed to be his maternal grandfather. The element of doubt arises from the fact that the precise identity of the child’s mother was intentionally obscured by the family because she and the father, Dr Daniel Hughes Taylor, were not married. Indeed, Dr Taylor had returned to his home country of Sierra Leone probably even before his son was born. Young Samuel’s mother subsequently married railway worker George Evans and the family moved to Croydon. Especially given the attitudes and prejudices that prevailed in 1880, the fact that George Evans took on an unmarried mother with a mixed-race child says much about the man.

It turned out that the little boy had a startling natural aptitude for the violin. Having been taken under the wing of local violinist Joseph Beckwith and later supported by Colonel Herbert Walters, Coleridge-Taylor’s talent developed rapidly and remarkably. Walters sponsored his entry to the Royal College of Music in 1890 as a violin student of Henry Holmes. But his abilities were not restricted to playing the violin: his interest in composition was developing and in 1891 he wrote an anthem, In thee, O Lord, which was immediately published by Novello. At the suggestion of Walters, it was arranged that Coleridge-Taylor would study composition seriously under Charles Villiers Stanford; he quickly won the first in a succession of composition scholarships.

Coleridge-Taylor possessed both prodigious talent and refined musical taste; it is worth observing that Stanford regarded him as one of his two most brilliant students, the other being Coleridge-Taylor’s friend William Yeates Hurlstone, who died at the age of thirty in 1906. Talented though Hurlstone undoubtedly was, Coleridge-Taylor’s gifts—especially his flair for melody—were of a higher order altogether. Stanford’s assessment of Coleridge-Taylor’s abilities represents no mean accolade when one considers that he also taught, among many others, Arthur Bliss, Frank Bridge, Gustav Holst, Herbert Howells, John Ireland, E J Moeran and Ralph Vaughan Williams. One rather touching illustration of Stanford’s regard for his favourite protégé is his contribution to Coleridge-Taylor’s college report at the end of the Easter term of 1895, in which he wrote under the column headings respectively: Regularity and Punctuality—‘Invariable’; Industry—‘Indefatigable’; and Progress—‘Indisputable’!

From 1896 the awakening of Coleridge-Taylor to his African heritage made an increasing impact on his music: he had been deeply moved by the spirituals of the African-American ‘Fisk Jubilee Singers’ who had recently toured England. At about the same time he met the African-American poet Paul Laurence Dunbar and settings of some of Dunbar’s poetry were his earliest compositions to be inspired by his race. Notwithstanding the duality of his racial heritage, Coleridge-Taylor regarded himself unequivocally as a black man. In advance of his first proposed trip to the USA, he wrote in a letter to Andrew Hilyer, the treasurer of the Samuel Coleridge-Taylor Choral Society of Washington DC: ‘I am a great believer in my race, and I never lose an opportunity of letting my white friends here know it.’ African-Americans naturally took Coleridge-Taylor to their hearts, representing as he did the embodiment of what black people could achieve if not actively prevented from fulfilling their potential.

Sir Edward Elgar also played a generous part in the development of Coleridge-Taylor’s career. In response to a request that he write an orchestral piece for the Gloucester Three Choirs Festival in 1898, Elgar wrote: ‘I am sorry I am too busy to do it. I wish, wish, wish you would ask Coleridge-Taylor to do it. He still wants recognition, and he is far and away the cleverest fellow going amongst the young men. Please don’t let your committee throw away the chance of doing a good act.’ The outcome was Coleridge-Taylor’s beautiful and dramatic Ballade in A minor; after he conducted the first performance on 12 September 1898 he received a standing ovation from both orchestra and audience.

For a shrewd and apposite assessment of the young Coleridge-Taylor, we can turn to Sir Arthur Sullivan, who attended the first performance in November 1898 of Hiawatha’s Wedding Feast—the work which has ensured the immortality of Coleridge-Taylor’s name. According to Coleridge-Taylor’s daughter Avril, Sullivan had said: ‘I’m always an ill man now, my boy, but I’m coming to hear your music tonight, even if I have to be carried.’ Afterwards, he recorded in his diary: ‘Much impressed by the lad’s genius. He is a composer, not a music-maker.’

The success of Hiawatha’s Wedding Feast was sensational and life-changing: almost overnight it made its composer famous throughout the English-speaking world and it initiated a sequence of commissions from the many annual festivals of choral and orchestral music which were then such a feature of British musical life. Although Coleridge-Taylor had regarded the Wedding Feast as a ‘one-off’, by 1900 he had completed second and third parts—The Death of Minnehaha and Hiawatha’s Departure. Many more choral and orchestral commissions were to be executed in the succeeding years.

Coleridge-Taylor wrote no chamber music after 1896 and, sadly, his final essay in the genre, a string quartet in D minor, is lost. Aside from the choral and orchestral festival commissions and incidental music for the theatre, he concentrated his compositional efforts for the most part on music for which he could secure a quick financial return such as duos for violin and piano, solo songs, part-songs and piano suites. Also, after 1899, in order to support his new wife and growing family, he was obliged to devote himself excessively to teaching, conducting and adjudicating. Indeed, overwork undoubtedly contributed to his tragically early death. As he often remarked with a wry smile, had he not sold the rights of Hiawatha’s Wedding Feast to Novello for fifteen guineas he would have been a wealthy man, rather than a somewhat impecunious one.