stop and hide
Update Required To play the media you will need to either update your browser to a recent version or update your Flash plugin.
Please wait... 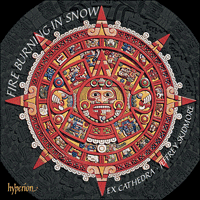 'For Fire burning in snow / is the effect of love.' The final lines of Juan de Araujo’s Dime, amor give this recording its title. In one sentence this conjures up the passion and dramatic contrasts of the whole continent of South America. These qualities are heard in abundance in the music of Araujo who has been described by many commentators as the greatest composer of the age, although much of his music is still rarely performed. Little is known about the man (he was a disruptive student in Lima and involved in litigation in La Plata), and there is almost certainly more material to uncover. He was born in Spain in 1648 and emigrated at a young age to South America with his parents. After a period as organist at Lima Cathedral he lived in Panama and Cuzco, where a few of his manuscripts are found, and from 1680 he spent the last thirty-two years of his life as organist at the cathedral of La Plata, now known as the Bolivian judicial capital of Sucre.

I visited this beautiful, ‘white’ city in May 2004 on my second research trip to Latin America. Also named the ‘Athens of America’, it is situated at an altitude of almost 3,000 metres in a highland valley, surrounded by gentle, fertile, low mountains. I can clearly remember the exhilarating crystal-clear air and deep blue sky as I sat on the terrace of the Hostal de Su Merced, sipping a soothing post-lunch pot of coca tea. This brought to mind the priest-seats on the roof of the nearby church of Convento de San Felipe Neri and seemed to be close to heaven. Also just around the corner from the hotel was the ABNB (the sparkling-new Bolivian National Library), and the cathedral, whose bells still call out to worshippers. The cathedral is small by South American standards but light and sunny. At the east and west ends are two galleries, one of which still contains the case of a seventeenth- or eighteenth-century organ. The service I attended was accompanied by an electric keyboard! Local markets are full of colour and the rich, apparently bountiful produce of the surrounding region. And yet Bolivia is one of the world’s poorest countries and the contrast between rich and poor is immense, as it was in colonial times. Sucre was built on the wealth of the silver mines in nearby Potosí, which at 4,090 metres is the world’s highest city and in the eighteenth century was also the richest and one of the largest. It has been estimated that eight million native Indians and black African slaves lost their lives in the mines between 1545 and 1825.

I should like to believe that Araujo was a good man. He was certainly a skilled musician, choir-trainer and director. He was at ease in the strict academic style required in liturgical music and equally at home in the foot-tapping style of the villancicos. Several of his pieces have already captured our imaginations: ¡Ay andar!, set at a euphoric dance-party; Los coflades, a ‘black’ processional piece perhaps dedicated to the African slaves who survived the mines and established communities in the Yungas to the north east of La Paz; ¡Aquí, Valentónes!, addressing the problems of gang-land. Araujo seems to have been in touch with the grass-roots. This recording presents eleven pieces (including one by Salazar) of which nine have never, to my knowledge, been recorded before.

There are few liturgical pieces in Araujo’s output. Here we record one of the largest pieces, the triple-choir setting in eleven parts of the first great Vesper Psalm Dixit Dominus. This substantial setting is through-composed and vividly captures the dramatic elements in the text with a dazzling display of polychoral techniques. Two triple-time sections recall the typical, toe-tapping black notation found in the villancicos and it is hard to imagine any resistance, at least from the musicians and congregation, to adding percussion at these points. The final ‘Amen’ achieves a suitably flamboyant and climactic flourish.

The vast majority of Araujo’s surviving works are non-liturgical pieces in the popular villancico style. These are now collected together in the Bolivian National Library. Ex Cathedra explores the complete range, including intimate duets and quartets, and works for two, three and four choirs. En el muy gran Padre Ignacio is an energetic and enthusiastic tribute to St Ignatius and contrasts with the soothing sensuality of the love duet Dios de amor. The exquisite quartet Dime, amor for three upper voices and bajón demonstrates Araujo’s gift for melody and his expressive use of harmony, while the light-footed, explosive energy shown in ¡A, del cielo! reveals this master composer equally at ease in conjuring up breathless excitement. Silencio is a ravishing, double-choir lullaby which makes a complete contrast with the dramatic exchanges in the triple-choir ¡A, del tiempo! and ¡A, de la región de luces!. The fiery ¡Fuego de amor! is written for four choirs. The extraordinary imagination of Araujo in his choice of texts, his sensitivity to word-setting, his melodic, harmonic and textural inventiveness is remarkable, if not breathtaking.

Araujo had a good set-up at Sucre Cathedral and he was able to make use of skilled professional singers and expert instrumentalists supplemented by native Americans and African slaves (yanaconas). The only instruments specified in the manuscripts are organ, harp and violin but many more were available, including cornetts, sackbuts, shawms, curtals (bajón and bajoncillo), flutes, harps, lutes, guitars and a wide range of percussion. Recent research suggests that instrumentalists were extremely versatile and a player listed as cantor, chirimía or ministril was probably able to play several instruments. The wind band tradition continued in Latin America long after it became obsolete in Europe and it gives the modern performer a wonderful palette of colours to play with.

One of the most popular pieces from our recent recordings has been the bull-fighting re-enactment ¡Salga el torillo hosquillo!, which appears in the Bolivian National Library in two versions. This new version is dedicated to the Virgin of Guadalupe. The refrain has only minor changes but the verses are now scored for alto soloist with the text no longer transforming the matador into the Christ Child but into the Virgin Mary. Next to Sucre Cathedral is the small Capilla de la Virgen de Guadalupe which was completed in 1625, and which houses the priceless bejewelled statue of the Virgin of Guadalupe with its dazzling diamonds, amethysts, pearls, rubies and emeralds. Annually, on the evening of 8 September, the Feast of the Virgin is celebrated. The following day colourful parades process around the square displaying religious images and silver arches. It must have been a similar celebration for which Salga was adapted in the eighteenth century.

Hanacpachap cussicuinin is another piece which has proved immensely popular. It is credited with being the oldest printed polyphony in the Americas (1631) and appears at the end of Juan de Peréz Bocanegra’s Ritual formularia, a manual for priests written in Quechua and Spanish with reference to Christian and Inca traditions. Bocanegra was a Franciscan parish priest, university teacher and cathedral singer who clearly worked closely and sympathetically with Andean peasants. He worked in Lima and Cuzco and had many disputes with the Jesuits. Hanac is a Christian hymn in adoration of the Virgin Mary, written entirely in Quechua. It is set for four voices in Sapphic verse to be sung in procession. There are twenty verses and this is the first complete recording, making full use of the choir and band in a variety of orchestrations. Each verse has five eight-syllable lines followed by a four-syllable phrase, printed in italics in the original manuscript. This phrase is often an epithet and sometimes acts as a link to the next verse. The complex language is full of extraordinarily colourful Christian, celestial and Indian imagery.