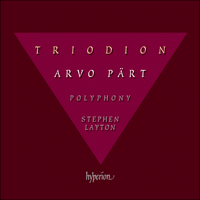 A new release from Polyphony, with Stephen Layton at the helm, always brings with it an assurance of singing of the highest possible calibre. Bring together a choir of such quality and the composer responsible for some of the most beautiful, transcendent music ever written, and the resultant disc is surely what must be one of, if not the most spectacular releases of the year.

New works from Arvo Pärt are invariably cherished, and this disc contains no fewer than five world premiere recordings—Dopo la vittoria, Nunc dimittis, Littlemore Tractus, My heart's in the Highlands and Salve regina. It was recorded in the presence of the enraptured composer earlier this year at the Temple Church, London.

This is a disc of achingly lovely music at its most mesmeric—prepare to be stunned.