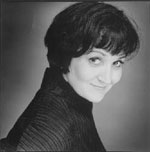 Born in Stockholm, Katarina Karnéus studied at Trinity College of Music in London and at the National Opera Studio, sponsored by Welsh National Opera, and Glyndebourne Festival Opera. In 1994 she was the recipient of the Christine Nielsen Award and in 1995 won the Cardiff Singer of the World Competition.

Internationally active as a concert and recital singer, engagements have included the Proms in London, the Salzburg and Edinburgh Festivals, a concert at Buckingham Palace with Franz Welser-Möst, concerts with Ozawa in Tanglewood, Berlioz’s La Mort de Cléopatre in the Amsterdam Concertgebouw, Schoenberg’s Gurrelieder in Düsseldorf and Elgar’s The Dream of Gerontius in Madrid and Barcelona. She appears regularly in recital at London’s Wigmore Hall, and recently gave recitals at La Monnaie in Brussels, in Washington, and made her New York recital debut at Lincoln Center.