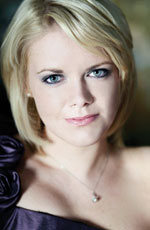 Born in Liverpool in 1986, Kathryn completed her studies at the Royal Northern College of Music with Susan Roper on the International Artist Diploma scheme in 2011. Upon graduating she joined the ENO Young Artist programme and between 2010 and 2013 was a YCAT artist (Young Classical Artists Trust). Kathryn is a BBC Radio 3 New Generation Artist.

Since being featured as The Times ‘Rising Star of Classical Music 2012’, Kathryn has made critically acclaimed debuts with English National Opera, Glyndebourne, Opera North and Garsington Opera. Concert work has included recitals at Wigmore and Bridgewater Halls, the Brighton, City of London and Cheltenham Festivals, and a performance of Carmen at Glastonbury Abbey.