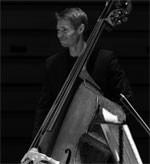 Andy first picked up the bass when he was eight and soon after was encouraged to begin attending the Royal College of Music Junior Department. He continued at the RCM for undergraduate and postgraduate degrees, studying with Caroline Emery.

In 2008 he was delighted to take up a post teaching double bass at the RCM JD, now making his association with the College continue for some 31 years. Since graduating in 2005 he has spent his career freelancing with London’s finest chamber groups such as the English Chamber Orchestra, London Mozart Players, and Britten Sinfonia, often as Guest Principal double bass.

Andy is a member of the London Chamber Orchestra and has been the bassist with the Les Misérables orchestra in the West End since 2011. He is a regular in London’s studios, recording for pop artists and playing on innumerable soundtracks for film and TV. Andy plays on a copy of a Maggini, attributed to Bernhard Simon Fendt II c.1840.