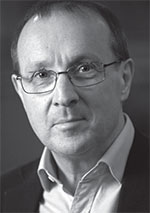 Nicholas Cleobury has an international reputation in the concert hall, opera house and recording studio, and as a lecturer and teacher. He is the Head of Opera at the Queensland Conservatorium, Artistic Director of Mid Wales Opera, Principal Conductor of the John Armitage Memorial (JAM) and Founder Laureate of the Britten Sinfonia. He has conducted most of the leading symphony and chamber orchestras of Great Britain, including the English Chamber, Hallé, London Mozart Players, London Philharmonic, London Symphony, Northern Sinfonia, Philharmonia, Royal Liverpool and Royal Philharmonic Orchestras, Royal Scottish National, Scottish Chamber, RTÉ National Symphony Orchestra, Ulster and all the BBC Orchestras. Further afield, he has conducted orchestras including Aalborg Symphony, Copenhagen Philharmonic, Czech Philharmonic, Gulbenkian, Stockholm Philharmonic, Swedish Radio, Tonhalle Zurich and Trondheim Symphony. He has also worked with orchestras in Melbourne, Singapore and South Africa (Cape Philharmonic Orchestra, KwaZulu Natal Orchestra/Durban and Johannesburg Philharmonic.)

He has appeared at festivals in Austria, Belgium, France, Poland, Spain and the USA and at major British festivals, including the BBC Proms. He was Principal Conductor of the Royal Academy of Music Opera and Musical Director of Broomhill and a regular guest at Zurich Opera, as well as working at English and Welsh National Operas and many other houses including Chicago, Gothenburg, Malmö, Omaha, Paris and Stockholm. He is an expert choral director, having been Assistant Director of the BBC Singers and worked with choirs from the Swedish and Danish Radio Choirs to the Melbourne Chorale, the Netherlands Chamber Choir and the Royal and Huddersfield Choral Societies.

Having given over 100 premieres, Cleobury is a fervent champion of new music and has worked closely with many notable contemporary composers, including Bennett, Boulez, Birtwistle, Maxwell Davies, Henze, Ligeti, MacMillan, Patterson, Ruders and Turnage, and collaborated extensively with the late Sir Michael Tippett and the late Sir John Tavener.