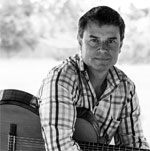 Described by BBC Music Magazine as ‘A worthy successor to Julian Bream’, the Australian-born guitarist Craig Ogden is one of the most exciting artists of his generation. He studied guitar from the age of seven and percussion from the age of thirteen. In 2004, he became the youngest instrumentalist to receive a Fellowship Award from the Royal Northern College of Music in Manchester. He has performed concertos with many of the world’s leading orchestras and numerous composers have written works specially for him. In 2017, he gave the world première of Andy Scott’s Guitar Concerto with the Northern Chamber Orchestra, followed by the Australian première in Perth. In the summer of 2019, he gave the world première of Il Filo with Miloš Milivojevic, a double concerto for guitar and accordion by David Gordon. Craig will be giving the world premiere of a concerto written for him by David Knotts in March 2022 at the Queen Elizabeth Hall, London with the BBC Concert Orchestra which will be recorded for BBC Radio 3.

Craig Ogden regularly appears as soloist and chamber musician at major venues, collaborating with top UK artists such as The Nash Ensemble, Carducci String Quartet and the London Tango Quintet, of which he is a regular member. He performed in the concert series devoted to Sir Michael Tippett at the Wigmore Hall and has given several concerts at the Australian Festival of Chamber Music. One of the UK’s most recorded guitarists, he has accumulated an acclaimed discography for Chandos, Virgin/EMI, Nimbus, Hyperion, Sony and six chart-topping albums for Classic FM. His most recent recordings are a solo recital disc for Chandos, Craig Ogden in Concert and a new arrangement of the 'Goldberg' Variations by J.S. Bach with violinist David Juritz and cellist Tim Hugh for Nimbus Records. He frequently records for film and has presented programmes for BBC Radio 3, BBC Northern Ireland, and ABC Classic FM in Australia.

Craig Ogden is Director of Guitar at the Royal Northern College of Music, Adjunct Fellow of the University of Western Australia, Associate Artist at The Bridgewater Hall in Manchester and Director of the Dean & Chadlington Summer Music Festival. Craig Ogden plays a 2011 Greg Smallman guitar and strings made by D’Addario.