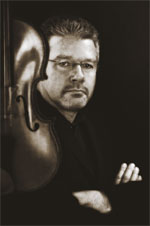 Duncan Riddell studied violin at Trinity College of Music, London, during which he became Leader of both the European Community Youth Orchestra and International Festival Youth Orchestra. He received college prizes and the Silver Medal at the first Shell LSO Music Scholarship for string players in 1978. On leaving music college, he founded the Roth String Quartet, which won international prizes and performed extensively. In 1989, the Quartet disbanded and Duncan accepted a principal position in the North German Radio Philharmonic Orchestra in Hannover. At the beginning of 1994, he was appointed Co-Leader of the London Philharmonic Orchestra and from 2001 to 2010 he was Leader of the Bournemouth Symphony Orchestra, during which time he appeared many times as a soloist and director, including a live BBC Radio 3 broadcast of Beethoven’s Triple Concerto with Andrew Litton.

In 2008, Duncan made his North American debut directing the Vancouver Symphony Orchestra in several concerts featuring Vivaldi’s The Four Seasons. Since taking up the post of Leader of the Royal Philharmonic Orchestra in 2010, he has continued his solo and directing work with the Orchestra. He is in demand as a guest leader with many of the major orchestras in the UK and Europe, and as far afield as North America and Japan, where he regularly appears as a guest leader with the NHK Symphony Orchestra in Tokyo.