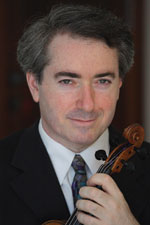 Hailed for his thrilling virtuosity, lustrous tone and profound artistic expression, Hagai Shaham is recognized as one of the top violinists to have emerged from Israel. He was a student of the late renowned Professor Ilona Fehér and completed his studies in the US with Emanuel Borok, Arnold Steinhardt and the Guarneri Quartet. Shaham’s accolades include ﬁrst prizes at the 1990 Munich ARD International Duo Competition, and the Ilona Kornhauser, Israel Broadcasting Authority and Tel Aviv Rubin Academy competitions, as well as Clairmont and America–Israel Cultural Foundation Awards.

In 1985 Hagai Shaham joined Isaac Stern and Pinchas Zukerman in a gala concert at Carnegie Hall in honour of Maestro Stern’s sixty-fifth birthday. He has performed with all the major orchestras in Israel, and with the English Chamber Orchestra, BBC Philharmonic, Royal Liverpool Philharmonic, São Paulo and Singapore Symphony orchestras, among many others. He is also in great demand as a recitalist, and regularly tours in Europe and North and Central America. In 2006 he performed Brahms’s Double Concerto with Mischa Maisky and the Israel Philharmonic, under Zubin Mehta, at the orchestra’s seventieth anniversary celebrations.

Hagai Shaham is in great demand as a recitalist and chamber musician, and his recordings for Hyperion have been enthusiastically received. He is a professor at the Buchmann-Mehta School of Music at Tel Aviv University and Artist in residence at Stony Brook University in New York.