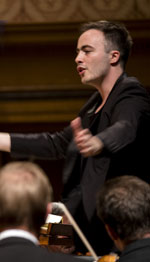 Born in 1989, Ben Gernon first attracted international attention in 2013 when he won the Nestlé and Salzburg Festival Young Conductor’s Award after a unanimous vote by the jury led by Ingo Metzmacher. Gernon is praised repeatedly for his effortless authority on the podium, his drive and command of the orchestra and his incisive, heart-felt and evocative interpretations, and has quickly earned himself a reputation as one of the finest and most exciting young conductors working today.

Already a favourite of many UK orchestras, Ben regularly works with several of the major British symphony and chamber orchestras, and has conducted twice at the BBC Proms, most recently in 2014 with the Scottish Chamber Orchestra on the occasion of Sir Peter Maxwell Davies’s 80th birthday. In Autumn 2017 he became the new Principal Guest Conductor of the BBC Philharmonic, one of the youngest conductors to have held a titled position with a BBC orchestra.

Ben studied at the Guildhall School of Music and Drama with Sian Edwards, with whom he still works closely, and with Sir Colin Davis, who was a profoundly influential figure in Gernon’s musical development. In his spare time, Ben is a voracious reader and he enjoys practising yoga. 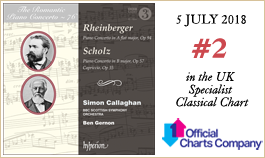