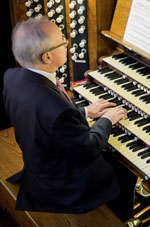 see also Sir Stephen Cleobury (conductor)
Stephen Cleobury is a highly versatile musician who relishes the opportunities he has to operate in a variety of roles and across a broad range of repertoire. At the centre of his musical life, for over 30 years, has been his work as Director of Music of King’s College, Cambridge. This has brought him into fruitful relationships with leading orchestras and soloists, among them the Academy of Ancient Music, the Philharmonia, Britten Sinfonia and the BBC Concert Orchestra. He complements and refreshes his work in Cambridge through the many other musical activities in which he engages.

At King’s, he has sought to enhance the reputation of the world-famous Choir, broadening its repertoire, commissioning new music, principally for A Festival of Nine Lessons and Carols, and developing its activities in broadcasting, recording and touring. He conceived and introduced the highly successful annual festival, Easter at King’s, from which the BBC regularly broadcasts, and, in its wake, a series of high-profile performances throughout the year, Concerts at King’s.

From 1995 to 2007 he was Chief Conductor of the BBC Singers, and since then has been Conductor Laureate. He was much praised for creating an integrated choral sound from this group of first-class professional singers, which is especially renowned for its performances of contemporary music. Amongst the premières that Stephen has given with the group are Giles Swayne Havoc, Ed Cowie Gaia, and Francis Grier Passion, all these with the distinguished ensemble, Endymion. His recordings with the BBC Singers include albums of Tippett , Richard Strauss and Bach.

Beyond Cambridge he is in demand all over the world as a conductor, adjudicator and leader of choral workshops. As an organ recitalist he has played in locations as diverse as Houston and Dallas, Manchester’s Bridgewater Hall, Leeds and Birmingham Town Halls, the Performing Arts Centre in Hong Kong, Haderslev Cathedral in Denmark, and Salt Lake’s huge LDS Conference Center. At the AGO in 2008, he premièred Judith Bingham’s organ concerto, Jacob’s Ladder.

Stephen has played his part in serving a number of organisations in his field. From his teenage years until 2008 he was a member of the Royal College of Organists, of which he is a past President. He has been Warden of the Solo Performers’ section of the Incorporated Society of Musicians and President of the Incorporated Association of Organists. He holds an honorary doctorate in music from Anglia Ruskin University, and is a Fellow of the Royal College of Music and of the Royal School of Church Music. He was appointed CBE in the 2009 Queen’s Birthday Honours. 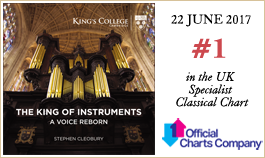 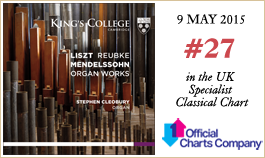