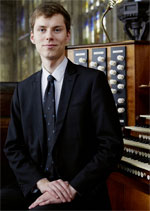 Richard Gowers was born in Cambridge to a family of academics and musicians. He learned the piano from the age of five and joined King’s College Choir as a chorister in 2003, later singing the solo in Once in royal David’s city at the 2007 broadcast of A Festival of Nine Lessons and Carols. He took up the organ with Nigel Kerry at the age of ten and subsequently studied the piano with Christopher Hughes and organ with David Goode, becoming a prize-winning Fellow of the Royal College of Organists aged 17.

In 2013 he won the Northern Ireland International Organ Competition and moved to Germany, where he spent a year studying the piano with Alexander Meinel and the organ with Stefan Engels and Daniel Beilschmidt at the ‘Felix Mendelssohn-Bartholdy’ Hochschule für Musik und Theater in Leipzig. This was thanks to a generous bursary from the Nicholas Danby Trust.

He was Organ Scholar at King’s College, Cambridge between 2014-17 and graduated with a starred first class degree in Music. During his time as an undergraduate, Richard accompanied the Choir at concerts at Bridgewater Hall, the Aldeburgh Festival, The Concertgebouw, on tours to the US, China and Europe, and at a BBC Prom in 2016. In his final year he played for the 2016 Festival of Nine Lessons and Carols. After leaving King’s he won a scholarship to the Royal Academy of Music to take a Masters in Piano Accompaniment with Michael Dussek and Joseph Middleton.

His career as a concert organist has not only involved recitals at major British venues but also a variety of performances abroad, including three solo tours to the US and performances in Brisbane, Reykjavik, Dresden and Toulouse. In March 2018 he gave the premiere of Nico Muhly's cycle for organ, The Lenten Gospels. As a pianist, organist and continuo player he has performed with several of the country’s leading orchestras, including the AAM, Aurora Orchestra, BBC Concert Orchestra, Britten Sinfonia, CBSO, Endymion, Hanover Band, LPO, OAE, Philharmonia, and The King's Consort.