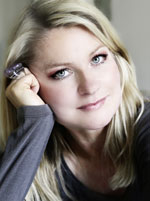 Mezzo-soprano Patricia Bardon is the youngest ever prize-winner of the Cardiff Singer of the World Competition and is in demand for repertoire ranging from the Baroque through to Rossini and Wagner.

Recent operatic highlights include the title role in Handel’s Agrippina at Theater an der Wien, the title role in Porpora's Germanico in Germania at the Innsbruck Festival, Erda in Der Ring des Nibelungen at The Metropolitan Opera, La Nourrice in Dukas' Ariane et Barbe-Bleu for Gran Teatre del Liceu, Azucena in Il Trovatore at Welsh National Opera, the world premiere of Saariaho’s Adriana Mater for Opèra National de Paris, the title role in Carmen for Los Angeles Opera, and Maurya in Riders to the Sea for ENO. At the Royal Opera House Covent Garden, Bardon has appeared in Guillaume Tell, Mefistofele, Rigoletto, Moise in Egitto, as well as Britten's Gloriana and The Rake’s Progress (earning an Olivier nomination).