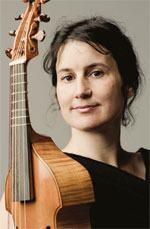 Emilia Benjamin came to the viol by a somewhat circuitous route. Initially interested in studying English Literature, she chose the University of East Anglia based upon a hazy memory of the campus—hazy due to the effects of her father’s sleeping pills, two of which she had taken the night before her interview in a panic about not sleeping. Given that he ordinarily took only one half which was sufficient to knock him out, it is a wonder she made it up there at all. As it was, in what was a rather prescient mistake, she found herself touring the music department, giggled her way through the interview and then realized, when she arrived to start her first term, that the campus she thought she had remembered was in fact the University of Warwick.

This turned out to be a fortunate error, since at UEA Benjamin was able to get involved in the music department as part of her degree, led the orchestra from the violin, which she has played since she was five, and went to a life changing concert of Dowland’s Lachrimae, the sound of which was so heavenly that she instantly became a viol player.

During her four years there, Benjamin changed subject to History of Art and made her own treble viol in the workshop of a lute maker, which she still plays today. She went to the Guildhall School of Music and Drama to do a postgraduate course in early music, specializing in viol and Baroque violin. Since then Benjamin has spent the intervening twenty-five years or so performing and recording, not just viol consort music, but a healthy pickings of most Western music written in the seventeenth and eighteenth centuries, playing not only viols but violin, viola, and lirone.