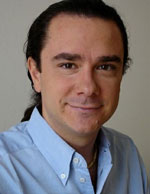 He has made numerous recordings from Bach cantatas and arias from Handel operas and oratorios, and recorded recitals of songs by Schubert, Haydn, Mozart and lute songs from the 17th and 18th centuries.