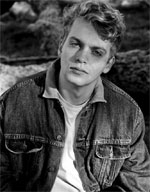 He has recorded Purcell ‘Royal Odes’ with The King’s Consort and Robert King, alongside Iestyn Davies and Carolyn Sampson.