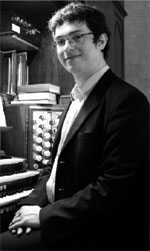 Martyn has performed several recitals across the country, including Liverpool Cathedrals, York Minster and Canterbury Cathedral. He has had a number of accompanist roles, from choral societies and musical theatre to cathedral choirs and school choirs.

He graduated with first-class honours from studying the organ and the piano at the Royal College of Music in London this year, having been appointed Sub-Organist at Her Majesty Chapels Royal, St James’s Palace the year previous. The Palace formerly employed musicians such as Handel, Byrd and Purcell among others.

In 2012, Martyn came second in the Northern Ireland International Organ Competition and was also awarded the prize for the best performance of a work of Bach. He has accompanied choirs in venues such as La Madeleine and Notre Dame in Paris, as well as Saint Mihaly and Saint Anna Templom in Budapest.

Martyn has played live on BBC Radio 3, BBC Radio 4, for a Christmas day broadcast with Classic FM and has recorded several CD’s for both Priory Records and Signum Records.