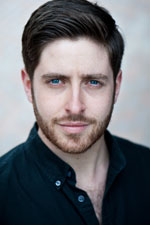 2017/18 English National Opera Harewood Artist Elgan Llŷr Thomas appeared with the ENO at Regent’s Park Open Air Theatre as Prologue/Peter Quint in The Turn of the Screw, as Johnny Inkslinger in Britten’s Paul Bunyan, and made his debut at the London Coliseum with ENO as Normanno in Lucia di Lammermoor.

A graduate of the Royal Northern College of Music and the Guildhall School of Music and Drama, Elgan joined Scottish Opera in 2016 as an Emerging Artist and made his debut as Nemorino in their touring production of The Elixir of Love. He has subsequently appeared in the company’s productions of Philip Glass’s The Trial and Strauss’s Ariadne auf Naxos. At the Mananan International Festival on the Isle of Man he has performed in Don Pasquale, The Italian Girl in Algiers and Il Barbiere di Siviglia. He also appeared in Il Barbiere di Siviglia at the Théâtre des Champs-Elysées, and reprised his role in Ariadne auf Naxos for Opera Holland Park.

Elgan has sung in semi-staged concert performances of Falstaff with the Cambridge Philharmonic Society and Tosca with the Orchestra of Welsh National Opera, Sir Bryn Terfel and Kristine Opolais. He has also played Tom Rakewell in a semi-staged performance of The Rake’s Progress with the Equilibrium Young Artists conducted by founder and soprano Barbara Hannigan at three festivals across the UK, Europe and the USA. Elgan has performed in a Gala Concert with the Xi’an Symphony Orchestra in China; Sir Karl Jenkins’ The Armed Man conducted by the composer; and Tippett’s A child of our time at the Dartington International Summer Festival, conducted by Paul McCreesh. Most recently he sang Mozart’s Requiem with the Danish National Symphony Orchestra, conducted by Barbara Hannigan at the DR Koncerthuset, Copenhagen.

Elgan is a recipient of a 2017/18 Opera Awards Foundation Bursary, and has received many awards and competition prizes in England, Wales and further afield. He is one of the first recipients of a Study Award from the Bryn Terfel Foundation.

Elgan is a familiar face on Welsh-language television channel S4C and performed a duet with Sir Bryn Terfel on his Christmas TV show Nadolig Bryn Terfel. He has released an album of Welsh songs called Llwybrau’n Cân and in 2017 recorded songs by Gareth Glyn on the album Caneuon Gareth Glyn.