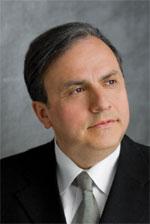 Internationally recognised as one of today’s most acclaimed and admired pianists, Yefim Bronfman stands among a handful of artists regularly sought by festivals, orchestras, conductors and recital series. His commanding technique, power and exceptional lyrical gifts are consistently acknowledged by the press and audiences alike.

Recent projects have included a residency with the Staatskapelle Dresden which includes all the Beethoven concerti conducted by Christian Thielemann in Dresden and on tour in Europe. Mr Bronfman has also performed Bartók concerti with the London Symphony Orchestra and Valery Gergiev in Edinburgh, London, Vienna, Luxembourg, and New York. Recital performances captured audiences with the cycles of the daunting complete Prokofiev sonatas over three concerts in Berlin, New York’s Carnegie Hall, and Cal Performances, Berkeley.

Mr Bronfman is a regular guest soloist at the Vienna, New York and Los Angeles philharmonics, Mariinsky, Cleveland and Philadelphia orchestras, as well as the symphonies of Boston, Montreal, Toronto, San Francisco and Seattle. Following the success of their first US tour, Mr Bronfman rejoined Anne-Sophie Mutter and Lynn Harrell in May 2016 for a European tour that took them from Madrid to Berlin, Moscow and Milan.

Mr Bronfman was awarded the Avery Fisher Prize in 1991, and the Jean Gimbel Lane Prize in piano performance from Northwestern University in 2010. He has been nominated for three Grammy Awards, one of which he won with Esa-Pekka Salonen and the Los Angeles Philharmonic for their recording of the three Bartók Piano Concerti.

Born in Tashkent in the Soviet Union on 10 April 1958, Yefim Bronfman immigrated to Israel with his family in 1973.