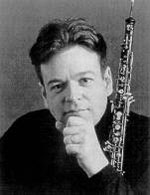 'A formidable virtuoso' (The Guardian)

One of the country's most distinguished and charismatic soloists, Nicholas Daniel is at the forefront of music in Britain today. His career began in earnest in 1980 when he won the BBC Young Musician of the Year Competition, the first in a number of competition successes.

Following his successful debut at the BBC Promenade Concerts in 1992 with the Vaughan Williams Oboe Concerto he was invited to perform the Strauss Concerto in 1994 and in 1996 give the world premiere of John Woolrich's Oboe Concerto commissioned for him by the BBC. This work and performance met with unanimous critical acclaim: 'Superbly played by Nicholas Daniel and the BBCSO under Matthias Bamert' (The Independent on Sunday), 'Composed for and played by the superlative Nicholas Daniels' (The Financial Times), 'A fine new oboe concerto immaculately premiered by Nicholas Daniel' (The Daily Telegraph).

New music plays an important role in his repertoire and recent works premiered include works by John Tavener, Diana Burrell and Howard Skempton. Some of the composers who have written for him read like a Who's Who of British music: Michael Berkeley, Sir Harrison Birtwistle, Colin Matthews, David Matthews, Thea Musgrave and Sir Michael Tippett.

A Fellow of both The Guildhall School of Music and Drama and The Royal Academy of Music, Nicholas Daniel has recently been appointed Professor of Oboe with Special Conducting Responsibilities at the University of Indiana, Bloomington. He is the first British oboist to be appointed by an American University.