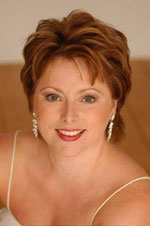 Rebecca Evans was born in South Wales, and studied at the Guildhall School of Music & Drama.

Highlights on the opera stage have included Contessa in Le nozze di Figaro, Mimì in La bohème, Pamina in Die Zauberflöte, Zerlina in Don Giovanni and Despina in Così fan tutte, all at the Royal Opera, Covent Garden. She has also performed at the Bayerische Staatsoper, Munich, and the Deutsche Staatsoper Berlin. For English National Opera she has sung the title role in Rodelinda, Governess in The Turn of the Screw and Romilda in Xerxes, and she has played many roles for Welsh National Opera, the Metropolitan Opera, New York, the Lyric Opera of Chicago and for the San Francisco Opera.

Equally busy on the concert platform, Rebecca has appeared at the Salzburg, Edinburgh, Tanglewood and Ravinia festivals and is a regular guest at the BBC Proms. Particular highlights have included appearances with the Leipzig Gewandhausorchester, the London Symphony and Hallé orchestras, Freiburg Baroque, the Accademia Santa Cecilia and the Orchestra of the Age of Enlightenment.