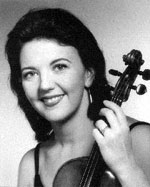 Tasmin Little is one of the world’s leading violinists. Born in London, she studied at the Yehudi Menuhin School and the Guildhall School of Music, and concluded her studies privately with Lorand Fenyves in Canada. She has performed with many of the world’s great orchestras with conductors including Masur, Rattle, Ashkenazy, Järvi, Slatkin, Gatti, Rozhdestvensky, Otaka, Mackerras, Menuhin, Andrew Davis and Roger Norrington. Tasmin is in increasing demand as a concerto soloist worldwide. Her repertoire includes nearly fifty concertos and she is recognized as a champion of new music: she has given several premieres, including concertos by Dominic Muldowney, David Earl, Robert Saxton, Paul Barker and most recently Stuart MacRae’s Violin Concerto at the BBC Proms. Tasmin is also a devoted chamber musician, performing in recital with Martin Roscoe, Piers Lane, John Lenehan, Wayne Marshall and Paul Watkins.

A respected interpreter of Delius, Tasmin Little made a television documentary about the composer for BBC Television’s ‘The Works’ and wrote a paper on his Violin Concerto which was published by the Delius Society. Her recording of Delius’s violin sonatas with Piers Lane won the prestigious Diapason d’Or award, was Record of the Month in Répertoire, and was nominated for a Gramophone award.