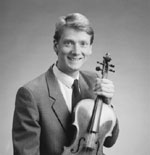 ‘…in complete command of his instrument’ and ‘very musical in the finest way’: so wrote the world-famous conductor Antal Dorati about Matthew Souter. As a soloist he has performed across the world both as a recitalist and with orchestras from the UK, Europe, Russia and the Far East. He has guest lead the viola sections in virtually all of Britain’s most celebrated orchestras such as the Academy of St Martin-in-the-Fields, English Chamber Orchestra, The London Philharmonic Orchestra, and many more. He has also been a regular guest at international chamber music festivals in the UK, Europe, and the Far East.

For the past 17 years Matthew Souter has been a member of the Alberni String Quartet, one of Britain’s most distinguished ensembles and described, after a Carnegie Hall recital in the New York Times, as ‘one of the finest half dozen quartets in the World’. He has been fortunate in his career to have been loaned some exceptional instruments on which to perform including a Gasparo de Salo of 1585 and a fine viola by Antonio Stradivari of 1696.

Matthew Souter has been a Professor at The Royal Academy of Music for 18 years and he has attracted both viola and violin pupils from all over the world—many of whom have gone on to have distinguished careers themselves. He is currently Head of Strings at Wells Cathedral School.