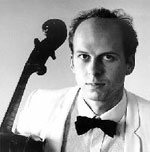 Tim Hugh is recognized as one of the finest, most dynamic and abundantly innovative cellists of the new generation. After wining two medals, including the Bach Prize, at the Tchaikovsky Competition in Moscow, he has appeared with many of Europe’s leading orchestras and worked with conductors including Boulez, Haitink, Rostropovich, Menuhin, Pappano, Previn, Sir Georg Solti, Sir Colin Davis and Sir Andrew Davis. He has toured extensively and also appeared in the Aldeburgh Festival and the BBC Proms in London.

After a year at Yale, studying the cello with Aldo Parisot, he gained his MA at Cambridge reading Medicine. Throughout this period he also studied with William Pleeth and Jacqueline Du Pré. In 1995 he was appointed Principal Cellist of the London Symphony Orchestra, with whom he immediately appeared as soloist with Pierre Boulez, standing in for Rostropovich.