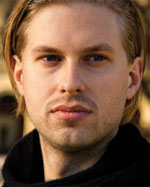 American baritone John Chest, winner of the prestigious 2010 Stella Maris International Vocal Competition and the Arleen Auger Prize in the 2012 Hertogenbosch International Vocal Competition, is on the verge of a major operatic career. He is a member of the ensemble at the Deutsche Oper Berlin, where his roles so far have included the title role of Billy Budd in a new production by David Alden, Albert Werther, Figaro Il barbiere di Siviglia, Ford Falstaff, Papageno Die Zauberflöte and Il Conte Almaviva Le nozze di Figaro.

Chest is a graduate of the Opera Studio at the Bayerische Staatsoper, where he sang over eighty performances. He has held apprenticeships with the Santa Fe Opera and the Chicago Opera Theater, and took part in the prestigious Merola Opera Programme. He holds a master’s degree in music from the Chicago College of Performing Arts at Roosevelt University, where he studied with David Holloway.