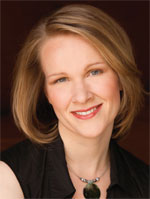 Joanne Lunn studied at the Royal College of Music in London, where she was awarded the prestigious Tagore Gold Medal.

Lunn’s extensive discography includes Vivaldi’s Laudate pueri with the King’s Consort (Hyperion), Haydn Masses with Sir John Eliot Gardiner and the Monteverdi Choir (Philips), Rutter’s Mass of the Children with the City of London Sinfonia conducted by the composer (Collegium), Gardiner’s Bach cantata cycle recorded during the Bach Pilgrimage in 2000 (Deutsche Grammophon/Soli Deo Gloria), Bach’s Easter Oratorio with Frieder Bernius and the Stuttgart Kammerchor (Carus) and Bach’s motets with the Hilliard Ensemble (ECM), Messiah with the RPO and Rutter, and Bach’s Wedding Cantata with Bach Collegium Japan (BIS) and John Passion with the Dunedin Consort (Linn), which was nominated for a Gramophone Award.