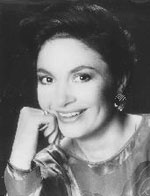 Jean Rigby studied at the Birmingham School of Music and subsequently at the Royal Academy of Music with Patricia Clarke.

She has a long association with English National Opera, where her many roles have included Penelope (The Return of Ulysses), Jocasta (Oedipus Rex), Carmen, Octavian, Britten’s Lucretia, Rosina, Helen of Troy (King Priam), Hyppolyta (A Midsummer Night’s Dream), Maddalena (Rigoletto), Amastris (Xerxes), Meg Page (Falstaff), Nicklausse (The Tales of Hoffmann) and Ruth in The Pirates of Penzance.

She is a regular guest at the Glyndebourne Festival. For the Royal Opera, Covent Garden she has sung Nicklausse and Dryade (Ariadne auf Naxos). She has sung Isabella (L’Italiana in Algeri) for the Buxton Festival and both Angelina (La Cenerentola) and Idamantes (Idomeneo) for Garsington Opera. Abroad, she has appeared with the Netherlands Opera), the Flanders Opera, Seattle Opera and San Diego Opera.