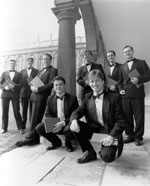 Henry's Eight was formed in 1992 while its then members were choral scholars at Trinity College, Cambridge, and takes its name from that college's illustrious founder. The group's early formation was largely the responsibility of two original members of 'The Eight', Robert-Jan Temmink and Nicholas Yates, and in 1994 the group was restructured as a professional ensemble constituting eight young male singers, all either current or past members of Cambridge's most distinguished choral foundations.

Musically the group remains diverse and imaginative in its performance of the a cappella repertoire, often juxtaposing medieval and modern, sacred and secular. Though their main focus lies in the music of the European Renaissance, Henry's Eight is also actively involved in the commissioning and performance of works by contemporary composers.

In all fields it is the group's aim to highlight neglected or underrated masterpieces in close association with the latest advances in musicology. Their debut recording for Meridian sought to revive the works of Robert White (1534-1574), a forebear of theirs at Trinity College. The group then embarked on a project investigating the largely unrecorded canon of the Franco-Flemish master, Nicolas Gombert (c1495-1560) for Hyperion. Another release on Hyperion is a two disc set of the Penitential Psalms of Lassus (c1532-1594).

Henry's Eight have performed extensively in the United Kingdom and abroad with tours to the USA, Germany and Southern Africa, including appearances in the Grahamstown International Festival and at the Nico Opera House in Cape Town. They have also performed in the Flanders Early Music Festival in Leuven and at festivals in Holland and Corsica. Recent United Kingdom appearances include concerts in the Bath International Music Festival, the Haslemere Early Music Festival, at the Maltings in Snape (Aldeburgh) and at St John's Smith Square, London, as part of the 1997 Christmas Festival. Forthcoming engagements include concerts in Symphony Hall, Birmingham, tours to Israel, Scandinavia and Japan—and, as a result of winning the Early Music Network Competition in 1997, a tour of Britain during Christmas 1998.