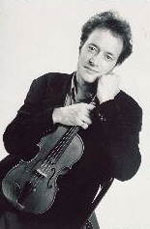 see also Anthony Marwood (violin)
Anthony Marwood was named Instrumentalist of the Year by the Royal Philharmonic Society in 2006. He is a frequent soloist with orchestras around the world, and in the next two seasons will make his debuts with the Boston Symphony Orchestra, the St Louis Symphony, the New Zealand Symphony, the Melbourne Symphony, and has reinvitations to the Los Angeles Philharmonic, the Chamber Orchestra of Europe, the Bournemouth Symphony, the BBC National Orchestra of Wales and the BBC Scottish Symphony Orchestra. He has worked with conductors such as Valery Gergiev, Thomas Ades, Yan Pascal Tortelier, Marin Alsop and Douglas Boyd.

Anthony also enjoys a flourishing career as a director, and last autumn completed a 12-concert tour as soloist/director with the Australian Chamber Orchestra. He is looking forward to guest directing Les Violons du Roy in Canada, the Scottish Ensemble and at the Australian National Academy of Music in Melbourne. Since January 2006 he has been Artistic Director of the Irish Chamber Orchestra, and is a regular collaborator with the Academy of St Martin in the Fields (their first CD together winning high praise). His passion for theatre resulted in two UK tours with the Academy of a fully staged production of Stravinsky's A Soldier's Tale, in which he acted the role of the Soldier as well as playing the violin part—his performance, directed by Lawrence Evans, was picked as one of the cultural highlights of the year by The Daily Telegraph.

He has had many works written for him, including Sally Beamish's 1995 concerto, subsequently televised for BBC4 and recorded on the BIS label. In the 2009-10 season Anthony Marwood will premiere two new concertos written for him, one by American composer Steve Mackey (a concerto for violin and electric guitar, commissioned jointly by the ASMF and the ICO) and one from New Zealander Ross Harris, with the NZSO. Thomas Adès's concerto Concentric Paths, which he premiered in September 2005 in Berlin and at the BBC Proms is the result of a fruitful musical partnership with the composer. He has since performed the work on numerous occasions giving the US premiere with the Los Angeles Philharmonic, the French premiere in Paris with the CBSO, and the Russian premiere in St Petersburg.

Anthony has made well over 30 recordings, and is a Hyperion Artist. Future plans include two concerto CDs for Hyperion in 2011.

He is the violinist of the celebrated Florestan Trio (the first trio to win a Royal Philharmonic Society Award, in 2000) and has performed all over the world with his colleagues Richard Lester and Susan Tomes. They have recorded much of the mainstream trio repertoire on Hyperion, many of them becoming benchmark performances. He has embarked on a touring project with the pianist, Aleksander Madzar, which will culminate in a series of three concerts at the Wigmore Hall in 2010/11.

Anthony Marwood enjoys teaching and each summer attends the Yellow Barn Festival in Vermont, where students and faculty perform together in a rural setting.

He plays on a beautiful violin by Carlo Bergonzi (1736), kindly bought by a syndicate of purchasers.