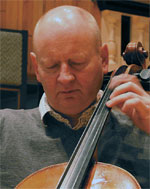 Justin Pearson is Artistic Director and Managing Director of the National Symphony Orchestra. For many years he has been a solo cellist in London’s West End theatre, and is currently performing in the RSC’s Olivier award-winning production of Matilda and the Tony award-winning show Christmas Carol at the Old Vic. He is frequently heard on television and cinema soundtracks.

Justin has been privileged to have given many premiere performances of new works for cello, notably Julie Cooper’s Cariad. Born in Dublin, Justin left Ireland at 14 to study in England with Derek Simpson of the Aeolian String Quartet. He entered the Royal Academy of Music where he won all available prizes for chamber music playing. Justin joined the Locrian String Quartet who became Resident String Quartet at The University of Hertfordshire.

The Locrian Quartet were prize winners at both Evian and Belgrade International String Quartet Competitions. The quartet commissioned premieres of works by Maconchy, Bedford, Lutyens, Crosse, McGuire, and collaborated with composers such as Penderecki, Lutosławski and Kurtag, undertaking very many tours, both national and international. Justin records for the Hyperion, Guild and Naxos record labels. Justin formed the Locrian Ensemble of London in 1985 in order to organise numerous tours, recordings and broadcasts. The ensemble established a long-running concert series in London at St Martin-in-the-Fields and many theatre concerts and festivals through Britain. Justin was appointed principal cellist in the National Symphony Orchestra UK in 1994, a position he still holds. Justin was made an Associate of the Royal Academy of Music in 2012, is Musical Patron to Sunbeams Music Trust in Cumbria and he served as Chairman of Governors of the Royal Society of Musicians of Great Britain, this country’s oldest musical charity.