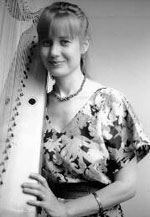 Frances Kelly began playing the harp as a junior exhibitioner at The Royal College of Music, London, then read music at Cambridge University. She subsequently furthered her modern harp studies with the renowned Dutch harpist and teacher, Phia Berghout.

Frances is well known as a chamber musician and soloist, and her interests encompass music from the Middle Ages to the present day. For many years she was involved with contemporary music but, since discovering Monteverdi, she has been increasingly drawn towards early music and the exploration of early harps, their repertoire and, in particular, to the use of the harp as a continuo instrument. She is now a leading exponent of early harps and has performed, broadcast and recorded with many leading early music ensembles including The Gabrieli Consort and Players, The New London Consort, the Orchestra of the Age of Enlightenment and The Brandenburg Consort.  She has worked with English National Opera, Opera North and Welsh National Opera. Recordings include Handel's Harp Concerto (with The Brandenburg Consort), Britten's A Ceremony of Carols (with New College Choir, Oxford, Trinity College Choir, Cambridge, and the Choir of Christ Church Cathedral, Oxford), and recordings of classical English song with Timothy Roberts and the vocal group Invocation.