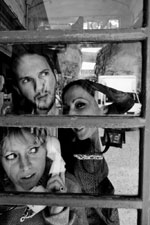 Described by The Telegraph as ‘the crème de la crème of young British-based musical talent’, and praised in BBC Music Magazine for their ‘irresistible combination of arresting programing and vocal flair assembled around pianist Joseph Middleton’, the newly formed Myrthen Ensemble brings together rising stars in the world of art-song and Lieder. The founder members were Mary Bevan, Clara Mouriz, Allan Clayton, Marcus Farnsworth and Joseph Middleton and they very much enjoy working alongside other outstanding young guest singers.

The group takes its name from the composition Robert Schumann wrote as a wedding present for his wife Clara in 1840. Myrtles have for centuries been seen as the German symbol of marriage and their modest form seems an apt image for the relationship between words and music, singer and pianist, imagination and sound and performer and audience. The vignette the group use to display their name has been designed using the ‘ornamental binding’ which Schumann’s original score carried. Delving into the treasure chest that makes up the canon of the song repertoire, The Myrthen Ensemble explores all areas of art-song through illuminating and thoughtful programming.

In their first seasons together the Myrthen Ensemble enjoyed performances at Snape Maltings as part of an Aldeburgh Festival residency, broadcast for BBC Radio 3, and gave a triumphant launch concert in London: ‘For sheer joy—for youthful panache and heartfelt commitment—nothing I have experienced musically this year comes near to matching this lovely soirée…there was no mistaking its exceptional musicality—every phrase was coloured and shaped, everything emotionally felt’ (Rupert Christiansen, The Telegraph). They have gone on to perform at the Wigmore Hall, as well as for BBC Radio 3 from the Bath MozartFest, Leeds Lieder, Newbury Spring, Norwich and Norfolk, Wimbledon, Northern Aldborough and St Magnus Festivals. Future seasons see them appear at Amsterdam’s Concertgebouw, New York’s Frick Collection, and at the Musée d’Orsay in Paris. The individual members can be heard in the world’s finest opera houses, musical centres and on numerous award-winning recordings.