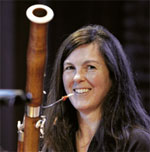 As a student, she read Anthropology and Music at King’s College, Cambridge, before gaining Countess of Munster, Martin Musical, Ian Fleming, and German government scholarships for postgraduate study at the Royal Academy of Music and Hannover’s Hochschule für Musik with Klaus Thunemann. During this time, she was Principal Bassoon of the European Community Youth Orchestra and won the Gold Medal at the Royal Overseas League.

As LSO Principal Bassoon, Rachel has worked with most of the world’s leading conductors, such as Sir Simon Rattle, Sir Antonio Pappano, Michael Tilson Thomas, André Previn, and François Xavier-Roth. She has toured all over the world, and has appeared on countless recordings, including film soundtracks and numerous albums for LSO Live. She was also a soloist on two discs for Cala Records, as part of their series of the complete wind chamber music of Debussy, Saint-Saëns and Ravel.

Rachel has appeared as a soloist with Sir Colin Davis, Valery Gergiev, Bernard Haitink, Sir Neville Marriner, Gianandrea Noseda, and Gennady Rozhdestvensky. Several solo works have been written for her, including the London Concerto by Huw Watkins, commissioned as part of the LSO's centenary celebrations. She has been a jury member on the Donatella Flick Conducting Competition and the ARD International Music Competition in Munich. She is a Fellow of the Royal Academy of Music.