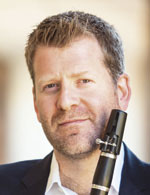 Chris Richards studied at the Guildhall School of Music & Drama, with Julian Farrell, Joy Farrall, and Thea King. Whilst there, he reached the finals of the 2001 Shell/LSO Competition, performing as a soloist with the London Symphony Orchestra. After his studies, he was appointed Principal Clarinet with the Royal Northern Sinfonia at The Sage Gateshead, and in 2010 became Principal Clarinet with the LSO. He has also performed as a guest Principal with most of the UK’s leading orchestras.

Chris has appeared as a soloist with the LSO, City of Birmingham Symphony Orchestra, Royal Northern Sinfonia, English Symphony Orchestra, and Birmingham Contemporary Music Group, with conductors including Sir Simon Rattle, Gianandrea Noseda, Robin Ticciati, James Gaffigan, Thomas Zehetmair, HK Gruber and Nicholas McGegan. He has also broadcast as a soloist several times on BBC Radio 3, and in December 2018 he performed and recorded Bernstein’s Prelude, Fugue and Riffs and Stravinsky’s Ebony Concerto with the LSO and Sir Simon Rattle.

A regular performer of chamber music, Chris has played at Carnegie Hall, Wigmore Hall, LSO St Luke’s, The Sage Gateshead and Aldeburgh Festival with artists such as the Elias Quartet, Navarra Quartet, Aronowitz Ensemble, LSO Chamber Ensemble, Ensemble 360, Thomas Adès, Pascal Rogé and Howard Shelley. In 2008, he gave the premiere of Richard Rodney Bennett’s Troubadour Music for clarinet and piano at Wigmore Hall. He is also a regular member of the John Wilson Orchestra and Professor of Clarinet at the Royal Academy of Music.