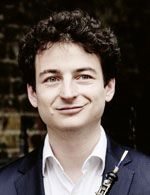 In 2015, Olivier Stankiewicz was appointed Principal Oboe of the London Symphony Orchestra, and Professor of Oboe at the Royal College of Music. He has given masterclasses at the Juiliard School, the Manhattan School of Music, the Sibelius Academy, the Voksenåsen Summer Academy, and in Hong Kong and Japan.

Born in Nice, Olivier studied at the Conservatoire National Supérieur de Musique in Paris. He was awarded 1st Prize at the 2012 International Oboe Competition in Japan, and in 2013 was named 'classical revelation' by the French association ADAMI. In 2016, he was selected by the Young Classical Artists Trust.

Sought after as a soloist, chamber musician and teacher, Olivier has performed widely in Europe, Japan, and the USA. Highlights include recitals at Wigmore Hall, Snape Maltings, the Louvre in Paris, Festspiele Mecklenburg-Vorpommern, the Isabella Stewart Gardner Museum in Boston, and Merkin Concert Hall and Morgan Library in New York. He has collaborated with Alasdair Beatson, the Doric and Castalian String Quartets, Jean Rondeau, Jonathan Ware and Alvise Sinivia, among many others.

Olivier has appeared as guest Principal with the Chamber Orchestra of Europe, Mahler Chamber Orchestra, London Sinfonietta, and the Philadelphia, Bavarian Radio Symphony, and Royal Concertgebouw orchestras. Between 2011 and 2015, he was Principal Oboe of the Orchestre national du Capitole de Toulouse.

Committed to new music, he has performed and premiered concertos by Laurent Durupt, Bernd Alois Zimmermann, and Benjamin Attahir, and was a founder member of the WARN!NG Collective, a group that develops and commissions new works, experimenting with sound painting, improvisation and innovative performance experiences. He recently released an album on Delphian of Mozart violin sonatas performed on the oboe.