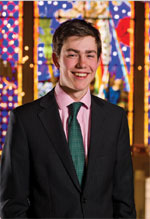 Edward was a Chorister at Winchester Cathedral, and took up the organ there with Sarah Baldock. He then gained a music scholarship to Eton, where he began to learn with David Goode. In his final year, he was awarded an Organ Scholarship at St John’s College, and the Associateship of the Royal College of Organists.

Following the earthquake in Christchurch, he divided his gap year in New Zealand between Auckland Cathedral and Christchurch Cathedral, spending six months in each.

During his time at St John’s, he gave recitals in King’s College, Cambridge and St Paul’s Cathedral, premiered works by Nico Muhly and Francis Pott, and played for numerous live broadcasts both in the UK and abroad. He loves the outdoors and is a committed environmentalist.