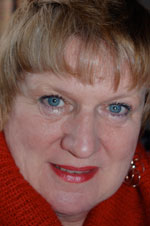 The English soprano Lynda Russell studied at the Royal College of Music in London, and in Vienna with Frau Eugenie Ludwig. She was awarded many prizes including the Kathleen Ferrier Memorial Scholarship.

Concert engagements have taken Lynda Russell far and wide, and include Górecki’s Symphony No 3 with the Orquesta Sinfónica de Tenerife, and Mahler’s Das klagende Lied with the BBC Symphony Orchestra at the BBC Proms. Other performances have included Britten’s Les Illuminations with the London Symphony Orchestra conducted by Mstislav Rostropovitch and Mozart’s ‘Coronation’ Mass with the Wiener Symphoniker.

Lynda Russell has performed leading roles in the major opera houses of the world—Barcelona, Madrid, Venice, Rome and Strasbourg as well as the Royal Opera House, Covent Garden. Lynda Russell’s recordings are extensive, from Vivaldi’s Gloria with The Sixteen to Frank Martin’s Maria-Triptychon with the London Philharmonic Orchestra.